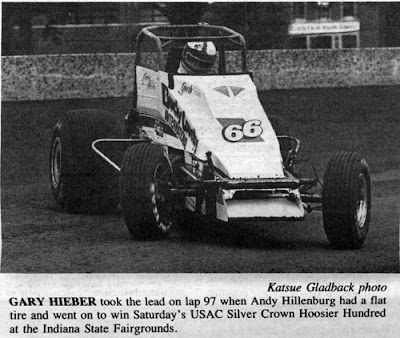 1990 – Gary Hieber picked up the $12,150 first prize in Saturday afternoon’s 38th annual Hoosier Hundred at the Indiana State Fairgrounds on August 11. After dominating the race for the first 96 laps, hometown favorite Andy Hillenburg suffered a flat tire during the USAC Sliver Crown event allowing Hieber to take over the lead. After the finish, the crowd of nearly 8,000 roared when Hillenburg, who limped home 14th, climbed from the car and walked over to shake the victor’s hand. “I could see on the last 10 laps that (Hillenberg’s) tire was pretty well worn,” remarked Hieber. Hillenberg told reporters, “I didn’t feel it going down until I entered the straightaway….I couldn’t believe it.” Jimmy Sills, Wally Pankratz, George Snider and Jeff Gordon would follow Hieber across the finish line. 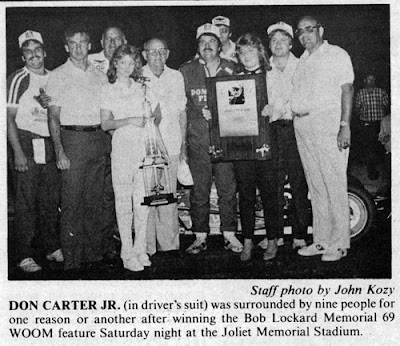 1984 – Don Carter Jr. continued his drive to the 1984 World of Outlaws Midgets (WOOM) title with an impressive victory in the fourth annual Bob Lockard Memorial at Joliet (Ill.) Memorial Stadium on August 11. The 69-lap feature saw Rich Corson and Mel Kenyon swap the lead several times before Carter and Rich Vogler joined the front pack. Kenyon would retire with a dropped cylinder allowing Carter and Vogler to move up. They both made several attempts to unseat Corson from the top spot with less than 10 laps left but were unsuccessful. With 3 laps left, Carter finally managed to drive deep into turn one to take the lead from Corson and coast the final two rounds to grab the win. Kenyon would pass Corson as well but retire a lap later with a malfunction in the oiling system allowing Corson to hang on for second. Russ Gamester, Jim Wartenburg and Steve Thinnes would round out the top five. 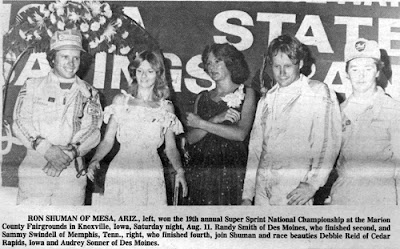 1979 – The “Fling Shoe” Ron Shuman of Mesa, Ariz., was flying in high gear on Saturday, August 16th, and claimed the $5,000 first prize in the 19th annual Knoxville Nationals. Shuman started in the third row and trailed Tim Green and Shane Carson, both of Des Moines, in the early laps. After moving by Carson for the runner-up spot, Shuman drew up behind Green when the yellow flag came out on lap 9. Shuman attempted to grab the lead on the restart but Green managed to keep out front and maintain a two-car length advantage. On lap 14, Green’s engine began to sour and one lap later Shuman took over the point while Green retired to the pits with a broken rocker arm. Shuman would sail the remaining laps to earn the victory. Knoxville weekly point leader Randy Smith of Norwalk, Iowa, would follow in second place and Sammy Swindell of Memphis, Tenn., would turn in the driving performance of the evening, coming home in third. Swindell, who won the B-main, started at the tail of the 24-car field. John Stevenson of St. Paul, Minn., and Shane Carson would round out the top five finishers. In addition to the first prize money, Shuman also picked up $800 in lap money and an estimated $1,250 in contingency money. 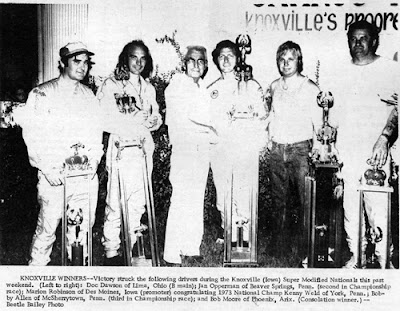 1973 – Kenny Weld of York, Penn., driving the Weikert Chevy won the Knoxville Super Modified National Championships for the fourth time before a record crowd on Saturday, August 11. Taking the drop of starter Marion Robinson’s flag, Weld shot into the lead from his pole position and would never be headed for the 30 lap finale. Weld had established a new track record in Thursday’s preliminary, setting a new mark of 19.49 seconds, breaking the record of 19.94 seconds set by Missouri’s Dick Sutcliffe two weeks earlier. Jan Opperman of Beaver Springs and Bobby Allen of McSherrytown would make it a Pennsylvania sweep for the top three spots. Rick Ferkel of Fostoria, Ohio and Sheldon Kinser of Bloomington, Ind., would complete the top five.