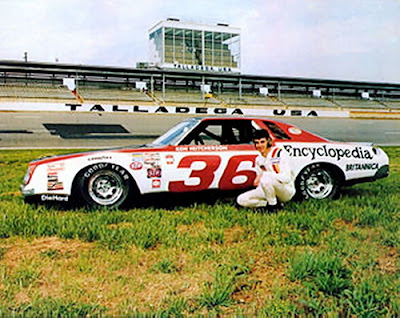 Hutcherson, brother of former Grand National star Dick Hutcherson, nearly drove Sauter, a father of nine and protégé of veteran Dave Marcis, into the front straightway wall trying to keep Sauter from sling-shoting his Dodge into the lead on the final lap.

"I couldn't be any happier about this win if I had been driving myself," said brother Dick, who prepared the winning car. “The car ran perfectly all day,” Ron said in Victory Circle. “I just wish I was driving here tomorrow. I’m sure we could have had a good chance of doing the, same thing we did today.”

Hutcherson led almost the entire race, giving way only briefly to Sauter, third place finisher Bruce Hill and Grant Adcox who was fourth. Hill and Hutcherson drafted together the first 60 laps, but Hill had trouble getting his Chevrolet in gear on a restart after a caution period, and dropped out of contention.

However, Sauter seized the opportunity to pick up the lead draft, which he had been frustrated in doing while Hill was in there, and he dodged Hutcherson the checkered flag.

“I’d got a little ground on him, but he was making it up fast on the last lap. I just tried a keep in a place on the track here he couldn’t get me, Hutcherson said. “I tried to keep close to a slow car on the inside so he couldn't get me low, and I was ready to block him if he came around high.”

The Hutcherson brothers both appeared bitter after the race over the Grand National race controversy.

“We could have run the ARCA car in the NASCAR race, but we didn’t want to. That would be admitting we did something wrong and we aren’t gonna do that,” said Ron.

“The NASCAR car is a brand new one. It fits every template NASCAR’s got, but Bill Gazaway (the inspector) says its illegal.”

“He says there’s something wrong with the fenders on the car, but he can’t tell us what.

There’s some reason they (NASCAR) don’t want us to run. I don’t know why. There’s nothing wrong with our car.”

Dick added, “I’m not saying don’t stretch the rule book. I’m just saying we’re not any different than any other car.”

Several of the top Grand National teams, including the cars of Cale Yarborough, Donnie Allison, Buddy Baker and Darrell Waltrip, were caught Wednesday with illegal fuel tanks, and fined $250, even though driven, admitted in some cases the tanks had been in use in several races and had been responsible for victories or good finishes.

“Maybe we ran too good here in May, and this is their way of punishing us,” said Ron, a Grand National newcomer who ran in the top three much of the race.