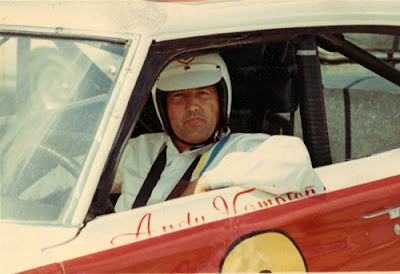 A six-lap lead that Hampton had acquired over young Bennie Parsons of Detroit stood the Louisville veteran in good shape. When Hampton’s axle gave way on his ‘67 Dodge Charger, Parsons, in a ’68 Ford, started cutting the lead down. Parsons ran out of laps in which to catch Hampton’s red and white #2 Charger, though, and settled for second place.

Bill Clemons of New Albany, Ind., driving a ‘68 Ford, finished third in the 500-lap event. Iggy Katona of Willis, Mich., failed in his try for a second straight Redbud victory. Katona was running third in his Charger when mechanical trouble forced him out of the race on lap 155.

Hampton and Parsons dueled throughout most of the race. Hampton, who had started in third spot in the 34-car field, last acquired the lead on lap 361, taking over from Parsons.

Parsons had jumped in front from his second starting spot on lap one, and lost the lead to Les Snow of Bloomington, Ill., on lap 6. When Snow’s car hit the wall on the 26th lap, the lead was taken by Jesse Baird of Louisville.

Parsons had it back by lap 137 and held it until lap 302 when he had to pit for 12 laps with a cut tire. That was when Hampton first took over from the Detroit driver. On lap 355, Hampton pitted and Parsons took over the lead again. Hampton got out of the pits quickly and six laps later, was back in the lead. By lap 450, Hampton had a six-lap advantage over Parsons’ yellow #98 car.