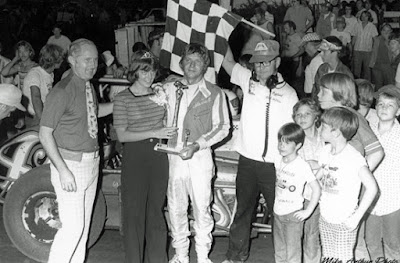 Leavitt, starting on the outside of the third row in the 20-car field, moved past Gary Dunkle on lap 11 and was never seriously challenged as he took the $14,000 first prize.

Dunkle of Lincoln, Neb., who held on for second place, was the second-fastest qualifier and jumped into the lead past pole-sitter Joe Saldana of Lincoln, Neb., at the start of the 30-lap event. Saldana had earned the pole position by setting a track record of 20.247 seconds around the one-half mile dirt oval in Thursday's qualifying.

Leavitt said he entered the race intending to run it “wide open”. The strategy worked as he breezed to his second consecutive championship. Lee Osborne of Jamestown, Ind., took third, followed by Bubby Jones of Danville, Ill., Saldana and Greg Weld of Kansas City, Mo.

Rick Ferkel of Findlay, Ohio, despite having his one-third-lap lead eliminated by a caution flag, captured the 22-lap B feature. Ferkel took the lead from Gary Patterson of Sacramento, Calif., on the ninth lap and lengthened it until the caution flag was thrown on lap 19 when Randy Smith of Mount Ayr, Iowa spun out on the backstretch. Lenard McCarl and Doug Wolfgang, the only Des Moines drivers in the B race, finished third and fifth, respectively. Wolfgang was the season point champion at Knoxville this season.

In the C feature, Rick Golde of Fullerton, Calif., led all 15 laps for the victory. However, misfortune befell Golde. By winning the C event he qualified for the B main. During the warm-up laps for that race, Golde's car overturned in the first turn. He was taken to a local hospital for examination but returned to the track before the completion of the evening’s racing complaining of neck injuries.