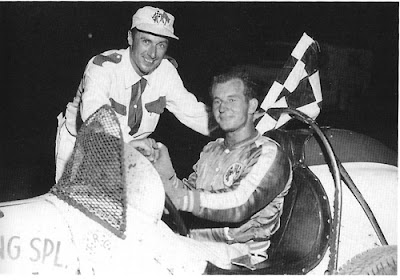 Parnelli Jones won both ends of a big car doubleheader at the All-Iowa Fair. Flagman Jake Bozony presents Jones with the checkers after he won the night-cap. - Jack Albinson Collection
Cedar Rapids, Iowa (August 21, 1959) - A sturdy young man with the unlikely name of Parnelli Jones made a remarkable Cedar Rapids debut in IMCA big car races at the All-Iowa Fair on Friday.

He started out by winning the first heat and the 15-lap feature of an invitational afternoon race before some 1,500 fans then returned to win the 20-lap IMCA championship feature for some 5,000 fans Friday night.

Parnelli accomplished his driving magic with a Chevrolet V-8 engine that embarrassed one of the best fields of Offenhauser's ever assembled on the Hawkeye Downs track.

In the feature he came from far behind to catch and passed the IMCA's current point leader, Pete Folse, in the final 2 laps of an exciting 16-car, 20-lap windup.

There were two accidents in Friday's doubleheader program. A. J. Shepherd escaped injury when his car hit a rut, spun out and crashed into the first turn railing heading into the I2th lap of the night feature.

During the afternoon events, Marvin Faw of Minneapolis suffered a shoulder injury and cuts when his car spun out on the backstretch and flipped during the late stages of the 15-lap feature.

The top race of the day was the 20-lap night feature. Arnold Knepper, who had the day's best time trial of 22.35, led for the first 11 laps and seemed to have things under control. Then, after the race was restarted following Shepherd’s accident, he faded out of contention after Folse took over the lead. Jones made his great finish to grab the head spot on the 18th lap and lead home a field in which every spot changed constantly as seven of the top point-makers were in competition.

It was a tough day for national point leader Folse, who failed to win a single race. He did wind up second in the feature ahead of Jim Hurtubise, Buzz Barton and Elmer George, and also took second in the consolation night event.

George, son-in-law of Indianapolis 500 Owner Tony Hulman, threatened to make a run-away of the night events in his first Cedar Rapids' appearance, but the torrid feature cooled his bid.

He put on a great performance in winning the night’s first heat and 5-lap dash event but couldn't keep up the pace in the feature.