1989 – For the second time in as many weeks, the United Sprint Association (USA) packed the house at the all-new Moberly (Mo.) Motorsports Park on Saturday August 4. The star-studded sprint car event produced a record crowd and a first-time series win for popular driver Dave Blaney as he piloted the Chupp Challenger to the $5,250 first prize in a thrilling drive from his sixth place starting spot. Home-state favorite Danny Lasoski desperately wanted the victory but it was Blaney who had the right setup and used the dangerous but less crowded high line to take the lead on lap 9 from “The Dude”. From there, Blaney cruised to an easy win over another hard-charger in Steve Kinser (who started seventh) and Kinser’s cousin Mark, who grabbed third place. Sammy Swindell and Lasoski rounded out the top five.


1984 – Randy Kinser and Greg Staab swapped wins over the weekend during the Summer Sprint Classic at Lawrenceburg (Ind.) Speedway on August 4 and 5. Kinser would take Saturday night honors as he outran Staab in the last four laps to claim the 40-lap feature. Danny Milburn would lead the first 12 laps of teh main event before Staab took command. Kinser would slide into the top spot five laps later and build up a comfortable lead until a caution bunched up the field on lap 36. Kinser would out sprint Staab over the four remaining laps to claim victory. On Sunday night, Staab would turn the tables, overpowering Kinser to win the second leg of the event. Kinser would grab the early lead with Stab and Ken Rice battling for second. On lap 17, Staab took the low groove by Kinser to take over the top spot. He built up and maintained a straightaway cushion for the remainder of the race. Kinser would settle for second ahead of Rice, Sheldon Kinser and Paul Huntington. 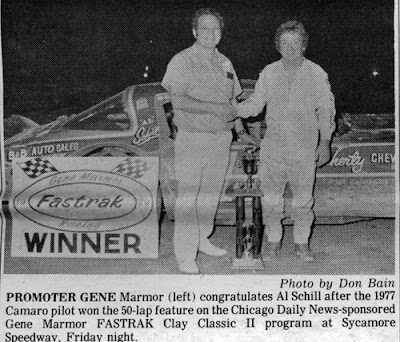 1979 – Continuing his current hot streak wherever he runs, versatile Al Schill of Jefferson, Wis., held things together while others couldn’t to win the Chicago Daily News-sponsored Gene Marmor Clay Classic II before an impressed crowd at Sycamore (Ill.) Speedway on August 3. What was billed as an Illinois versus Wisconsin FASTRAK late model challenge found two starters from Indiana on the front row in Dick Potts and Paul Schaefer. But it was not to be their night or that for a host of other front runners who encountered all sorts of mechanical issues. Schill would survive it all with room to spare as one challenger after another was sidelined as the race went on. Schill, in what was his first start ever at Sycamore, acted like he knew the track was his own. He arrived late, yet set fast time in qualifying with relative ease. Schill would win the 50-lap feature just as easily as 12 of the 20 starters would be on the sidelines when the checkers flew. 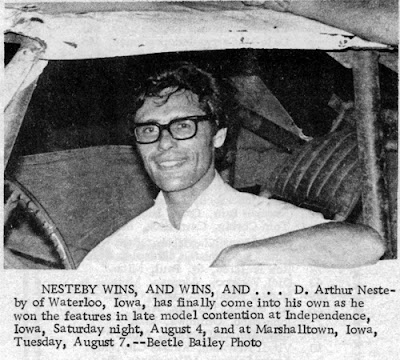 1973 – Dan Nesteby of Waterloo, Iowa and Dr. Al Mayner of Winthrop, Iowa engaged in a battle of late model stock cars at Independence (Iowa) Motor Speedway on Saturday, August 4, with Nesteby eventually capturing his first feature win of the season. Nesteby gained the lead from Gary Crawford of Independence on lap eight only to relinquish it to Mayner three circuits later. Not to be denied, Nesteby would battle Mayner tooth and nail for the next 10 laps before reclaiming the top spot on lap 21 and then holding on for the remaining four laps to claim victory. Ed Sanger of Waterloo, Iowa, would squeeze by Mayner on the last lap to earn runner-up honors while Mayner settled for third. Curt Hansen of Dike, Iowa, would take fourth followed by Karl Sanger of Waterloo.