Earl Wagner of Pleasantville, Iowa passed away on September 24th. Earl won 43 career races at Knoxville Raceway, which still puts him in the top-five on the all-time win's list and was a three-time Knoxville Raceway champion ('58, '59, and '61).
He was inducted into the Knoxville Raceway Hall of Fame in 1979 and the National Sprint Car Hall of Fame in 2008. In addition to his many achievements at Knoxville, Wagner also was a very accomplished driver on the IMCA circuit.
Below is a photo of Wagner after he scored one of his IMCA-sanctioned sprint car victories. 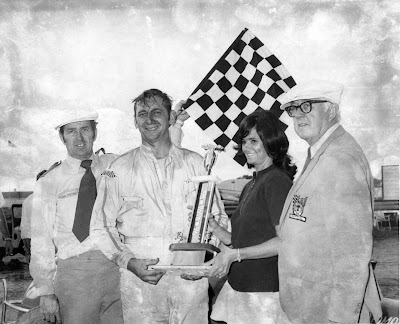