1986 - Mike Frieden of Swisher, Iowa waited through two days of rain, then topped a field of 106 IMCA modifieds in the IMCA Super Nationals at the historic 1/2-mile of Knoxville Raceway on Sunday, September 21. It was Frieden's second straight Super Nationals victory. Frieden took a rock through the radiator midway through the 30 lapper and started to show smoke with just a few laps remaining but held on for the win. Kent Kaplan of Ankeny, Iowa, Kevin Larkins of Firth, Neb., Ted Beaman of Council Bluffs, Iowa and Mark Noble of Blooming Prairie, Minn. were right behind Frieden as he took the checkers. 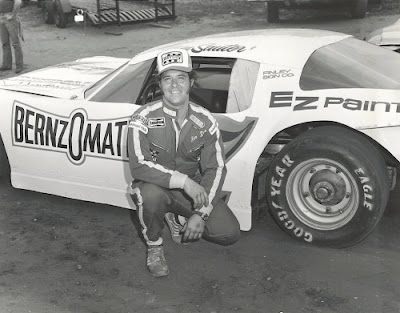 Jim Sauter was all smiles after winning his first National Short Track Championship at Rockford Speedway on September 21, 1980.

1980 - Jim Sauter of Necedah, Wis., became the 11th different winner in the 15 year history of the National Short Track Championships as he won the 200-lap event at Rockford Speedway 1/4-mile on Sunday afternoon, September 21. Sauter grabbed the lead on lap 51 only to lose it to Joe Shear of South Beloit, Ill., on lap 134. Later on, Shear got bogged down by lap traffic relinquishing the lead back to Sauter for good on the 159th circuit. Despite numerous attempts by Shear to regain the lead, Sauter held strong to take the win followed by Shear, Dick Trickle, Mark Martin and John Knaus. 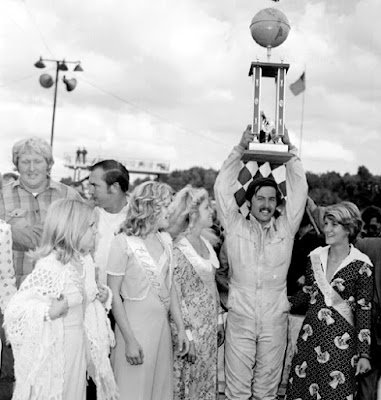 Joe Merryfield of Des Moines, Iowa, can lay claim to winning the World 100 as he pulled off the feat on September 21, 1975.

1975 - Joe Merryfield of Des Moines captured the coveted World 100 late model stock car race at Eldora Speedway in Rossburg, Ohio on September 21. Bill Beckman of Lisbon, Iowa led the first 18 laps before giving way to Doug Kenimer of Dahlonega, Ga. Merryfield would get past Kenimer where he would stay for the remainder of the race. Defending champion Ed Sanger of Waterloo, Iowa and former winner Verln Eakers of Cedar Rapids would make it a top-three clean sweep for the Iowan contingent.


1967 - Darrell Dake of Cedar Rapids, Iowa, driving a 1967 Ford Fairlane led all 30 laps of the IMCA regional new model stock car feature at the Iowa State Fairgrounds in Des Moines on September 20. Although he led green to checker, Reinbeck, Iowa's Cal Swanson and Cedar Rapids' Bill McDonough were in close pursuit the whole way until they both encountered problems. McDonough had just moved into second when he tagged the turn two wall hard sending him to the pits and Swanson blew an engine on lap 28 as he was moving to Dake's bumper. Lee Kunzman of Guttenberg, Iowa would grab runner-up honors and John Connolly of Delhi, Iowa would take third.