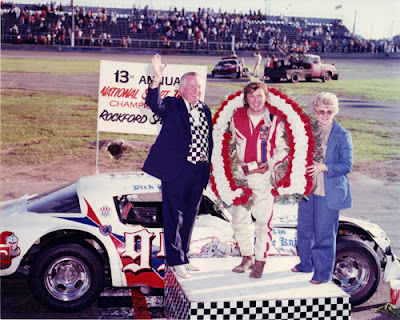 National Short Track Championship winner Dick Trickle is joined by Rockford Speedway owners Hugh and Jody Deery.
1978 - Dick Trickle of Wisconsin Rapids, Wis., won the very first National Short Track Championship at Rockford Speedway in 1966. He had a long wait for the next one. Twelve years later Trickle repeated the performance as he won the 13th annual race in stylish fashion lapping all but one of the 32 competitors in the 200-lap race on Sunday afternoon, September 24.
Jim O'Connor (8) gets a little sideways in front of Dick Nelson (11) during the National Clay Short Track Championship at Santa Fe Speedway in Hinsdale, Ill., on September 24, 1972. — Vince Mayer Pho1972 - Fatigued-ridden Arnie Gardner of Geneva, Ill., retired after leading 182 of the 200-lap National Clay Track Championship allowing Kankakee's Jim O'Conner to win the marathon 100-mile late model feature and the $2,200 prize that accompanied it. Gardner led every lap and by 125th go-round, had lapped the whole field with the exception of O'Conner and Ed Sanger of Waterloo, Iowa. But on lap 182, Gardner waved his hand, drove into the infield and slowly exited his car, overcome from exhaustion.