2004 - John Hampel of Nodaway, Iowa took the lead from Tiffin, Iowa's Denny Eckrich on lap 9 then survived a caution four laps from the finish to win the annual Cornhusker Classic, a World Dirt Racing League-sanctioned event at Nebraska Raceway Park on Saturday night, October 2. The win was Hampel's third series victory of the season and second consecutive triumph at NRP having won the spring event over Memorial Day Weekend. Mark Teske of Spring Valley, Minn., nudged Eckrich at the line for second, Brady Smith of Solon Springs, Wis., was fourth and John Anderson of Omaha rounded out the top five. 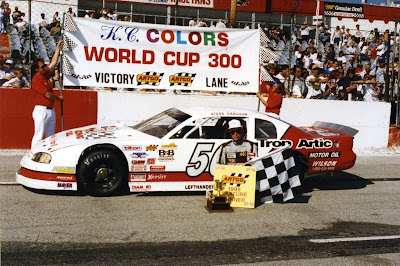 Steve Carlson flashes that winning smile after scoring the victory in the ARTGO Challenge Series-sanctioned "World Cup 300" at I-70 Speedway in Odessa, Mo., on October 1, 1995. — Robert Pilsudski Photo
1995 - Steve Carlson of West Salem, Wis., passed Jeff Klem of Kansas City, Kan., on lap 213 and then held off a furious charge from Kevin Cywinski of Menominee, Mich., to win the 12th annual World Cup 300 in the ARTGO Challenge Series event on Sunday afternoon, October 1. After Carlson nosed his Chevrolet Monte Carlo underneath Klem going into turn three to grab the lead, he then took advantage of three caution periods to hold off Cywinski. Jim Weber, Matt Kenseth and J.R. Roahrig were the top five finishers.
1989 - Pete Parker of Kaukauna, Wis., led over three-quarters of the monumental Miller High Life 200 National Clay Track Championships on the half-mile clay oval of Santa Fe Speedway in Hinsdale, Ill., to net the $13,000 first place check on Sunday evening, October 1. Parker passed Oak Lawn's Bob Pohlman on lap 47 and never relinquished it. From there, Parker had a secure lead with no challenges. Ronnie Johnson of Chattanooga, Tenn., John Provenzano of Hinckley, Ill., Gary Webb of Davenport, Iowa and Ray Guss Jr. of Milan, Ill., rounded out the top five.
1976 - Don Hoffman of Des Moines, Iowa led from start to finish in winning the National Dirt Track Championships at the Mississippi Valley Fairgrounds in Davenport, Iowa, on Friday night, October 1. Hoffman's only challenge came from Des Moines' Joe Merryfield who was moving in on Hoffman when he spun his late model with one lap to go and was unable to recover in time for the checkered flag. Ron Weedon of Pleasant Valley, Iowa took third ahead of Lisbon, Iowa's Roger Dolan and Tom Steuding of Altoona, Wis., finished fifth.