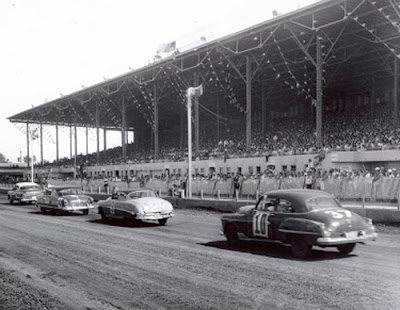 IMCA stocks cars race down the front stretch at the Nebraska State Fair. - Photo courtesy of Lee Ackerman
by Lee Ackerman
Omaha, Neb. - In 1915 a gentleman by the name of J. Alex Sloan created a new racing series called the International Motor Contest Association. Known for many years for Big Car Races, the series would start a stock car division in 1949. Actually, the first race of the series was held on November 9, 1947 in Lubbock, Texas. In 1949 it became a full-fledged series and like its Big Car counterpart raced mainly at State and County Fairgrounds.
One of its venues was the Nebraska State Fairgrounds in Lincoln during the State Fair. On September 9, 1949 the series made its debut in Lincoln. After 100 laps or 50 miles Eddie Anderson, an auto mechanic from Grinnell, Iowa would come away with the top money of $500. Anderson driving a 1949 Mercury that he had purchased and rebuilt after it had been in a major traffic accident earlier in the year, finally gained the lead on lap 63 and went on to take the win despite having a loose fender from banging the wall.
Anderson would go on to claim the 1949 IMCA Stock Car Championship. Wayne Selzer of Omaha had led the race from lap 9 through lap 63 when he blew a tire and had to go pit side. The crew got the tire changed in good time and Selzer rejoined the race and was able to bring his Ford home in third. Herschel Buchanan of Shreveport, Louisiana (the 1950 & 1951 IMCA Stock Car Champion) would finish second in his Nash. Frank Luptow an IMCA Big Car driver and Champion of that series from 1949 through 1951 would finish fourth in his Oldsmobile. Norm Horn of Great Bend, Kansas would finish fifth in a Packard. Woody Brinkman of Lincoln, (later an IMCA official) would finish sixth in a Ford. (Are you noticing all the different brands of cars that competed). 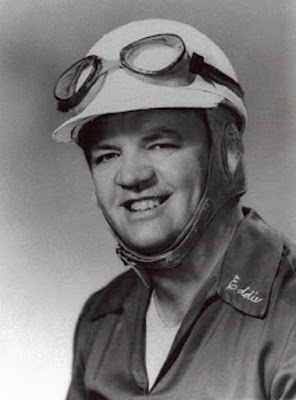 Eddie Anderson of Grinnell, Iowa, would not only win the 100-lap Nebraska State Fair race but would go on to win the 1949 IMCA national championship. - Photo courtesy of Lee Ackerman
The series returned to Lincoln on September 8, 1950 to race before a crowd of 21,000 fans. Defending race winner and series champion Eddie Anderson grabbed the pole with a time of 33.04 seconds as 20 cars signed in. Anderson would keep his 1950 Mercury out front for a good portion of the race. Four drivers would challenge Anderson through various stages of the race, they included; Dick Howe of Chicago, Frank Trauer of Omaha, Don White of Keokuk, Iowa and Art Combs of Emporia, Kansas.
Unfortunately, all four would end up out of the race because of accidents. On lap 69 Anderson and Howe tangled coming out of the turn two sending both cars through the infield fence. Anderson would lose five laps in the pits and Howe three straightening out bent up fenders. Anderson would retire from the race on lap 89 after spinning and going through the infield fence in turns 3 and 4. Trauer was leading on lap 86, despite a near spin after touching the wall would lose the lead, when he had a tire blow out sending him to the pits.
This left three cars to fight it out for the win, Wally Dahl of Minneapolis, Marvin Sams of Montezuma, Iowa and Jim Morgan of Davenport, Iowa. Dahl, who had driven a heady race and stayed out of trouble was able to bring his 1949 Oldsmobile across the line ahead of the other two. Sams would come home second in a Mercury with Morgan finishing third in his Nash. Herschel Buchanan followed in fourth in another Nash with Carl Lilienthal of Atlantic, Iowa rounding out the top five in a Ford. Sixth would go to Don White of Keokuk, Iowa (later a three-time series champion) in a Mercury followed by his brother-in-law and later 12 time series champion Ernie Derr in a Ford. A driver named Carter from Chicago would finish eighth in a Kaiser. Yes, I said a Kaiser.
In 1951 they lengthened the race to 125 laps and 18,000 fans showed up to see the stock cars do battle. Dick Rathmann, later of Indy 500 fame would set fast time of 32.53 seconds driving his Hudson. Rathmann’s race was however, short lived as he lost a wheel on the first lap of the race and retired from the event. Herschel Buchanan got the lead early in the race and keep his Nash in front until on lap 23 Wild Bill Harrison of Topeka, Kansas got by him in his Plymouth. Harrison would never relinquish the lead and kept his Plymouth in front the whole time. “It was a Plymouth track,” Harrison would say after the race, “hard and slick.”
The advantages of the track condition were evident in the later stages of the race as defending race winner Wally Dahl could make up ground on the straightaways but give it back to Harrison in the turns. Harrison actually turned a lap of 32.16 seconds during the race which was faster than Rathmann’s pole setting time. Several accidents marred the event and on at least two occasions potential winners retired from the race with broken axles. Following Harrison and Dahl to the line was Buchanan in his Nash, Chris Skadal of Des Moines in his Oldsmobile, Ernie Derr in his Oldsmobile and Chug Montgomery of Springfield, Missouri in his Oldsmobile.
The 1952 race was won by Dominic Perlick of Minneapolis, Minnesota in a record time of 1 hour 37 minutes and 25 seconds. Perlick would go on to win the 1952 series championship. Another crowd of 18,000 fans showed up for the 1953 IMCA Stock Car races at the Nebraska State Fair and the man who won the race would go on to dominate the IMCA Stock Car Series. Ernie Derr now driving out of Keokuk, Iowa would put his Oldsmobile in victory lane. Derr probably would not have had a chance for the win being down two laps to the pole sitter and race leader Les Snow, but on lap 101 Snow’s Hudson blew a tire. Snow had set fast time of 34.06 seconds and had literally checked out from the field when the incident occurred. Following Derr across the line at least one lap down was Bill Harrison of Topeka with Snow from Minneapolis finishing third, Lincoln’s Marv Copple fourth in his Oldsmobile and Russ Gross of Quincy, Illinois in fifth. Only 12 cars finished the grueling event. Ernie Derr would go on to win the 1953 series championship, the first of his 12.
The 1954 race at Lincoln was extended to 150 miles. Don White of Keokuk, who had lost the 1953 series championship to his brother-in-law would set fast time of 31.48 seconds with Herschel Buchanan second 32.35 and Bill Harrison third at 32.62. White would keep his Oldsmobile at the front all day and set two new records along the way. He broke Dom Perlick’s 125-mile record and set a new record for 150 miles at 1 hour 40 minutes and 29 seconds. The battle for second through fourth was much more heated and involved at least two mishaps. Holding on to grab second was Herschel Buchanan with Chris Skadal third, Bill Harrison fourth and Bob Potter of Duluth, Minnesota fifth.
Don White would also win the 1954 IMCA series championship edging out, who else, his brother-in-law, Ernie Derr. Over the years as other forms of entertainment became available and State and County Fairs became less of an attraction, attendance at the fairs and the races starting dropping.
The IMCA Stock Cars would race annually during the Nebraska State Fair through the 1964 season. The series would continue to race through the 1977 season. But during its day in the sun, the IMCA Stock Car series provided some great moments to the fans at the Nebraska State Fair and other venues that they raced at.