by Kyle Ealy
Cedar Rapids, Iowa - I was sifting through my newspaper archives this afternoon and ran across the September 18, 1963 edition of National Speed Sport News.
Here's a little of the Midwest action they covered in that issue: 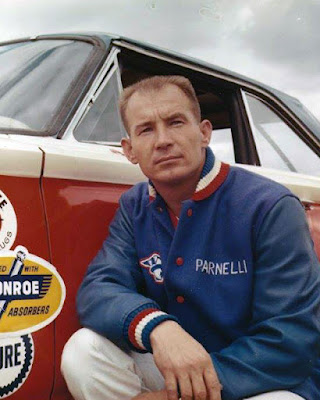 Parnelli Jones won the 250-mile late model stock car race at the Milwaukee Mile on September 15, 1963.
Parnelli Jones of Torrance, Calif., and his red-hot 1963 Mercury continued its dominance of late model stock car racing as he won the 250-mile national championship race at the Milwaukee Mile on Sunday afternoon, September 15. Jones averaged 90.659 miles per hour as he won in convincing fashion leading 247 of 250 miles and had a 31 second lead on teammate Rodger Ward when he took the checkers.

The grand finale of the '63 season at Olympic Stadium in Kansas City saw Greg Weld winning a "ding-dong" of a feature over his brother Kenny. A fire in Kenny's engine compartment with just a few laps left sidelined him leaving the door wide open for his older sibling.

Bill Lutz, hit hard by bad luck all season long, captured the 100-lap season championship feature at O' Hare Stadium in Chicago on Saturday. September 14. Driving a 1961 Chevrolet, Lutz moved past Gene Marmor, who had a bit of bad luck of his own with steering problems, on lap 43 and led the rest of the way.

John Libby, general manager of the Minnesota State Fair in St. Paul, Minn., announced on September 16 that preliminary work was being made to resurface the historic half-mile clay track. The new paved raceway would be unveiled during the 10 days of the 1964 Minnesota State Fair on August 29th through September 7th. Total cost for the project would be between $75,000 and $100,000. Libby said that Frank Winkley of Auto Racing, Inc. would once again be promoting racing events.