1968 - What a salesman; Weedon wins at East Moline 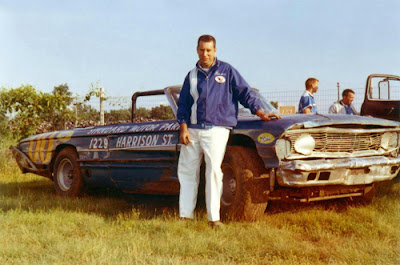 Prior to the start of the 50-lap IMCA late model season championship stock car race at Quad City Raceway on Sunday, September 15th, Weedon's crew had track announcer Dick Ferguson announce that Weedon's 1967 Ford convertible that Weedon had driven with great success all season long was for sale.

Weedon then drove the car to victory in the 50-lapper nosing out Mt. Joy, Iowa's Jim Gerber for the checkered flag and also edging out Gerber to win the season point's title in the process.

The veteran from Pleasant Valley, Iowa completed one of his greatest years in racing as he also captured the season championship at the Mississippi Valley Fairgrounds in Davenport, Iowa the previous week.

Gerber started on the pole with Weedon to his outside to start the feature. Weedon took the high groove past Gerber at the start and proceeded to lead for the next 31 laps with Gerber challenging for the lead every now and then. On lap 32, as the two ran through heavy traffic, Gerber put his nose out front as they crossed the start/finish line.

At this point Weedon, like fullback in football, used a "block" perfectly. Bob Stogdell was on the inside of the track, aware that he was about to be lapped. Weedon sailed past Stogdell as close as he could but Gerber was trapped behind the lapped car and had to ease up on the throttle to avoid contact.

Stogdell had no place to go and neither did Gerber and Weedon opened up a healthy lead after that and won by 50 feet at the checkers. Gerber settled for the bridesmaid role, Dean Montgomery of Milan, Ill., took third, Shorty Bennett of Moline grabbed fourth and Ray Guss of Milan rounded out the top five. Gerber was ahead in points to start the evening but with Weedon's heat and feature wins, he won the title by 45 points over Gerber.