Bits and Pieces of the Yankee Dirt Track Classic

The late models go four-wide in a salute to a packed house at Farley Speedway prior to the green flag at the 25th Annual "Yankee Dirt Track Classic" on September 14, 2002.
by Kyle Ealy
Cedar Rapids, Iowa - With this weekend's Yankee Dirt Track Classic already in full swing I thought I'd go back and relive some of the great moments in the history of this great race. The Yankee started at my home track of Hawkeye Downs Speedway and moved to Farley Speedway in the following years and continues to be one of the most prestigious race events in the Midwest.
1981 - Ken Walton of Viola, Iowa became the third Iowan in four years to win the Yankee Dirt Track Classic as he dominated the event at Hawkeye Downs Speedway on September 19. It was Walton's first win of the season on the half-mile and he picked up $5,000 of the $30,000 purse. Walton broke the track record (:21.237) previously held by Rodney Combs of Lost Creek, W.Va. With the top-six inverted, Walton started on the outside of row three but made his way up to second by lap 23 and passed race leader Ed Sanger of Waterloo, Iowa on the 41st lap to take the lead and hold it to the checkers.
1985 - Tom Hearst of Wilton, Iowa became the first two-time winner of the Yankee Dirt Track Classic as he scored an impressive 100-lap victory worth $3,000 before a sell-out crowd at Hawkeye Downs on September 14. Hearst, the top qualifier in time trials, started outside in the third row with the top six qualifiers inverted. Pole sitter Bob Hill of Story City, Iowa led the first 22 laps of the race then Hearst took over and stretched his lead. Hearst lapped all but Hill and third place finisher Steve Kosiski of Omaha on his way to victory.
1987 - Dale Fischlein of Independence, Iowa cut short the string of victories in the Yankee Dirt Track Classic at two for Tom Hearst as he scored the $3,000 win in the 10th annual event on September 19. Fischlein started fourth in the 32-car field and followed Dave Chase of Omaha for the first 24 laps before making what would prove to be the winning pass. Steve Kosiski, Jeff Aikey, Dave Birkhofer and Rollie Frink rounded out the top-five finishers.
1992 - Ray Guss Jr. of Milan, Ill., scored the biggest win of his young career taking the win in the prestigious 100-lap Yankee Dirt Track Classic at Farley Speedway on September 19. Guss stared on the pole by virtue of winning the J & J Challenge, which pitted the top six qualifiers in time trials in a six-lap race. Guss then proceeded to lead all 100 laps collecting all available lap money and pushing his Saturday night earnings to over $8,000.
1995 - Steve Kosiski of Omaha captured his second Yankee Dirt Track Classic in a row at Farley Speedway on September 16. Kosiski won the 18th annual event after inheriting the lead from Denny Osborn as the Janesville, Wis., driver pitted with a flat tire on the 85th circuit. Jeff Aikey of Cedar Falls, Iowa, Jay Johnson of West Burlington, Iowa, Gary Webb of Blue Grass, Iowa and Greg Kastli of Waterloo, Iowa rounded out the top five.
1997 - Jeff Aikey of Cedar Falls, Iowa captured the 20th Annual Yankee Dirt Track Classic at Farley Speedway on September 13. Aikey started the race on the outside of the second row and quickly settled into third position. He overtook Denny Osborn on lap 22 and then started to chase down race leader Steve Boley. After battling for numerous laps, Aikey was able to wrestled the lead away from Boley on the 79th lap. Boley would retire a few laps later with a flat right rear tire as Aikey sailed to the $10,000 victory. 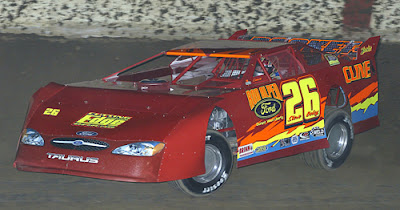 Steve Boley won the Yankee Dirt Track Classic in 2000. - Enhance Racing Images
2000 - Steve Boley of West Liberty, Iowa captured his second consecutive Yankee Dirt Track Classic, an O' Reilly Auto Parts All Star Series event, at Farley Speedway on September 16. The event marked the final race at Farley Speedway under the auspices of Frieden Inc. Al Frieden, the creator of the prestigious event passed away the month before. Boley, who won the pole award in Friday night qualifying, led all 100 laps in taking the $10,000 first prize. Jeff Aikey, Joe Kosiski of Omaha, Bob Dominacki of Bettendorf and Ryan Dolan of Lisbon, Iowa followed Boley to the finish line.
2002 - The 25th anniversary of the Yankee Dirt Track Classic saw Brian Birkhofer come from the rear of the field to win the 100-lap A-main. Birkhofer had started on the pole but broke his left rear axle at the start. His crew quickly repaired the axle and Birkhofer realigned at the rear of the 30-car field. He steadily worked his way to the front, taking the point on lap 57 and never looking back in winning his first fall classic. Todd Davis of Iowa City, Iowa, Denny Eckrich of Oxford, Iowa, Jeff Aikey and Mark Burgtorf of Quincy, Ill., rounded out the top five.