by Lee Ackerman
Omaha, Neb. - According to Allan Brown’s wonderful book “The History of American Speedways: Past and Present”, they have racing at the fairgrounds in Fairbury, Illinois since 1926. In 1939 they changed the configuration of the track from the typical half-mile county fairgrounds to a quarter-mile track. After a hiatus because of World War II the track came back to life in May of 1946 and has been active ever since. On Labor Day weekend 1990, they started running an event which has become the signature event for what is now called The Fairbury American Legion Speedway, that race is the Prairie Dirt Classic. 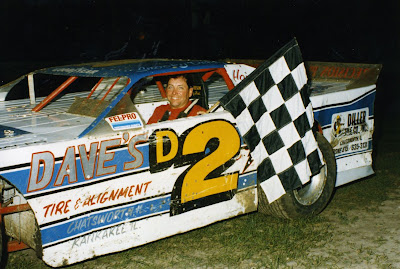 Snooky Dehm of Chatsworth, Ill., was the winner of the inaugural "Prairie Dirt Classic" at Fairbury American Legion Speedway in 1990.
That first Prairie Dirt Classic took place on September 1, 1990. Kevin Roderick led until lap 5 when Snooky Dehm of Chatsworth, Illinois grabbed the lead and held on until lap 52 when Tom Pauley wrestled the lead away from Dehm by taking the high side. Unfortunately for Pauley his lead lasted exactly one lap when his motor let go on the next lap. Dehm took over the lead again and led the final 7 laps to win the first Classic and take home a $3,500 paycheck. 1990 track champion Mike Mulvain was up to second by lap 14 but couldn’t get past Dehm. Mulvain, however did finish second picking up $1,700 for his efforts and that combined with the $2,000 he won in the Dash for Cash made him the nights big money winner at $3,700. Tom Rients would finish third from his fifth row starting position with Eddy Shickel fourth and Kevin Roderick fifth.
In 1991 it was Kevin Weaver of Gibson City, Illinois who dominated the second annual Prairie Dirt Classic. (Weaver would win the 1992 UMP National Championship). The driver who would become known as “the Flatland Flash” took the lead on lap 3 from pole sitter Ed Bauman when he went to his favorite spot, the high side and never relinquished the lead as he went on to pick up the $5,000 first place money. Baumann would hang on to grab the runner-up spot with Mike Mullvain finishing third after battling Jim Rarrick and Steve Tyne throughout the event. Tyne would finish in the fourth position with Roger Long “the Flying Farmer” finishing fifth. Four caution flags flew during the 60-lap event.
By 1992 and the third running of the Classic, the event had started to draw the attention of drivers from afar. 40 drivers from 7 states showed up for the event that paid $6,000 to win. Bryan Dunaway set fast time and then came back to win the trophy dash and grab the pole position for the 60-lap main event. Heats were won by Mike Mullvain, Billy Moyer, Kevin Weaver and Don Hobbs. The two semi’s went to Tod Garrels and Roger Long. Bryan Dunaway took the lead but that lasted for only two laps when Billy Moyer charged from his outside second row starting. The race went green until lap 27 when Tom Rients spun. On the restart it was Moyer, Kevin Weaver and Dunaway. By lap 32 it had turned into a three-way battle for the top spot between Moyer, Weaver and Long. Long looked like he make overtake Moyer but then the caution flag came out at lap 38, and, he had to settle back into second and would end up following Moyer to the checkers. Moyer would pick up the first of his four Prairie Dirt Classic titles. Long would finish second, Mullvain third, Dunaway fourth and Weaver fifth.
In 1993 Billy Moyer became the first two-time winner of the race. First, he would set fast time at 13.876 seconds. Next, he would win the dash and grab the pole position. At the start of the race, Moyer took off and was never headed as he picked up $7,000 for his winning his second Classic. The race was run with only one caution flag, that coming on lap 39. Bob Pierce who started in tenth would work his way up to second and was mounting a challenge to Moyer when the lone caution waved. Pierce would settle for second. Tom Rients, Roger Long and Bryan Dunaway would follow. Once again 40 cars from 7 states participated in the event. Heats were won by John Gill, Pete Parker, Jim O’Connor and Pierce. 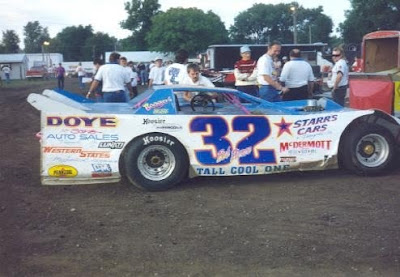 Bob Pierce of Danville, Ill., would start a run of five Prairie Dirt Classics victories in 1994. - Dennis Piefer Photo
In 1994 the driver who would be called “the Tall Cool One” won the first of his five Prairie Dirt Classic titles. Bob Pierce of Danville, Illinois guided his Larry Shaw Race Car to the front of the race from his front row starting position. By lap 16 two time and defending race winner Billy Moyer was right on Pierce’s bumper. Finally, after numerous attempts Moyer got by Pierce on lap 47. Three laps later Pierce switched lanes and dove low and retook the lead. On the next lap Moyer made the same move on Pierce and retook the point. On lap 53 Pierce regained the lead by muscling under Moyer and lead the last seven laps. In victory lane Pierce commented that “the track was smooth and fast and there was definitely more than one groove. Moyer and I were pretty even and it just worked out for me tonight.” Following Pierce and Moyer home were Kevin Weaver, Billy Drake and Eddy Shickel. Heats went to Larry Davis, Roger Long, Corey Turner and Shickel. Weaver won the dash and Gary May set quick time at 13.475.
In 1995 Bob Pierce won the Classic for the second time and he would later win again in 1999, 2000 and 2001 making him a three-peat winner and as of now the only five-time winner of the Prairie Dirt Classic. Billy Moyer is the 2008 and defending race champion and the only 4-time winner. Since those early Prairie Dirt Classics John Gill, Billy Drake, Shannon Babb (twice), Don O’Neal, Dennis Erb, Jr., Jimmy Mars and Brian Birkhofer have added their names to the list of winners of the race. One thing is for certain the Prairie Dirt Classis has become a stable to Illinois Dirt Late Model Racing and every year on the Saturday night of Labor Day weekend you can count on seeing some of the country's best dirt late model drivers competing in the Prairie Dirt Classic.