1987 - Randy Boggs of Grayson, Ky., regained the lead from Billy Moyer Jr. of Batesville, Ark., on lap 96 when Moyer's car lost the rear end to win the World 100 at Eldora Speedway in Rossburg, Ohio, on September 13. Boggs had led the most laps in the feature until surrendering the lead to Moyer on lap 87 only to get it back for good nine laps later. Fast qualifier and new track record holder (:16.114) John Mason of Millersburg, Ohio, finished second, Freddie Smith of Kings Mountain, Ga., took third, Bobby Carnes of Chillicothe, Ohio, fourth and Russ Petro of Columbus, Ind., rounded out the top five. Boggs took home $20,000 for the victory.

1981 - "I really wanted to win this one," said veteran race car driver Dick Trickle of Wisconsin Rapids after winning the 1st Annual Larry Detjens Memorial at State Park Speedway in Wausau, Wis., on September 10. Trickle won the second of two 25-lap features and placed third in the first contest to clinch the overall crown before 3,000 race fans. Marv Marzofka of Nekoosa, Wis., won the first 25 lapper. 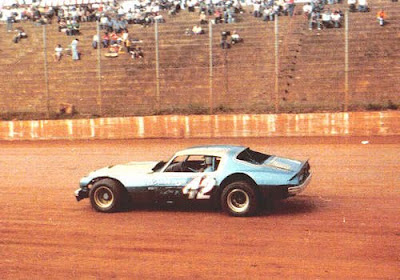 Doug Kenimer of Dahlonega, Ga., made his midwestern stock car tour pay off with a victory in Topeka, Kan., on September 12, 1976.

1976 - Race fans were treated to stock car racing southern-style when Doug Kenimer of Dahlonega, Ga., made off with the 30-lap feature and collected the $1,000 paycheck at the MId-America Fair in Topeka, Kan., on Sunday afternoon, September 12. Kenimer outlasted both Bill Martin of Council Bluffs, Iowa and Joe Wallace of Kansas City to take the win. Jerry Wanciewicz of Omaha grabbed fourth and Galen Schaefer fifth. The main attraction Ernie Derr of Keokuk, Iowa was a no show but that didn't seem to deter the 2,500 fans in attendance.