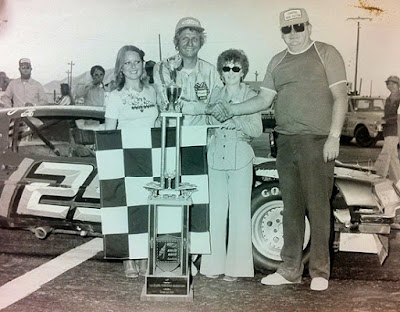 Larry Detjens accepts his trophy and congratulations after winning.

Las Vegas, Nev. (October 30, 1977) - After coming all the way from frigid northern Wisconsin. Larry Detjens froze out defending champion Larry Phillips over the final few laps to capture the ninth annual NASCAR Championships at Craig Road Speedway Sunday afternoon before a crowd of 5,400.

Detjens, Wausau, Wis., who started from the second row, took over the lead on the 55th lap from pole-sitter Jimmy Insolo and drove a perfect race for the remainder of the 150-lapper over the quarter-mile paved oval.

The 33-year-old body shop owner never had trouble with his 1976 Camaro until the brakes began to fade over the final 20 laps. But he had built up a large enough lead that he could afford to ease up a little and still hold off the hard-charging Phillips who was only about five lengths behind at the finish.

Phillips, Springfield, Mo., had won last year’s finale at Craig Road and started ninth in this race. But he moved quickly through the field and took over second place from the quickly-fading Insolo on the 71st lap. By that time, Detjens had built up a sizable lead.

Detjens, who earned $5,000 plus lap money and contingencies, and Phillips were the only drivers on the same lap when the checkered flag fell.

Ivan Baldwin, Modesto, Calif., who started fifth, drove his usual steady race to finish third, while Jim Robinson, Sylmar, Calif., turned in the most spectacular work of the day, starting in the 24th and final spot on the grid with his 1974 Camaro and finishing fourth.

Robinson, who did not qualify during the time trials Saturday but won a semi-main event to earn a spot in the finale dueled former Craig Road champion Jim Sanderson over the latter half of the race, but Sanderson's badly smoking Camaro slowed considerably over the final 15 laps.

Phil Hayes, this year's Craig Road points champion, was the only other Southern Nevada driver in the field. He started fourth and lost valuable groun early in the race but still finished strong.

“It was a well-run race. I’m certainly happy to win it,” said Detjens. “Everything was going our way. But 20 laps from the finish, the brakes began to fade. I had to get off the pace a little just to save them.”

Detjens said he had only a little bit of brakes remaining when the race finished but he couldn't afford to make any mistakes with Phillips behind him.

"I raced back in the Midwest with him,” the winner said of Phillips. "He’s an excellent driver, one of the top racers up there.”

It was Detjens first trip to the West and he called Sunday’s event the best pay day for any quarter-mile race of 150 laps anywhere in the country. Detjens was particularly happy with the safe driving of his rivals who forced only a few routine yellow flags and one red caused by a four-car mishap 44 laps into the event.

“I’m impressed with the drivers out here. They're excellent.”