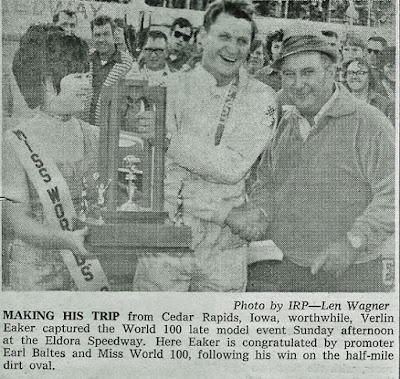 Cincinnati’s Pat Patrick showed the way for the first 46 circuit in his 1970 Chevelle, owned by Cliff Polking. Bill Zwanziger of Waterloo, Iowa, would get past Patrick on lap 47 and hold the top spot until lap 82 when Eaker would roar past en route to the victory.

Zwanziger would spin out, finishing 16th with Patrick regaining the runner-up and staying there until the end. Bruce Gould of Milford, Ohio, driving a 1971 Torino, would take third.

Chevrolet drivers Earl Smith of Anniston, Ala., and Chick Hale of Lewisburg, Ohio rounded out the top five. Ron Edwards of Cincinnati copped the semi-feature ahead of Bob Davis of Mansfield, Ohio.