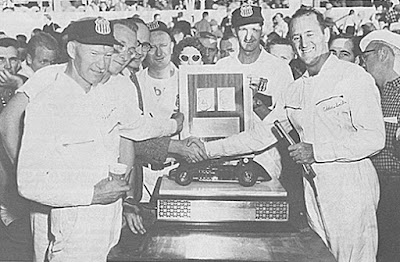 Sachs’ victory in the Salem race earned him 296.5 points. Second-place in the championship standings went to A.J. Foyt of Houston, Tex., who also finished second in the race, a half-lap behind Sachs.

Elmer led the first 16 laps of thee race but spun out on lap 17 and dropped far back. He managed to recover well and finish fourth behind third-place Rex Easton of Springfield, Ill.

Sachs won $1,236 out of a total $7,000 purse. Heat races were won by Leon Clum of Wapakoneta, Ohio; Bob Wente of St. Louis, and Bob McClellan of Waynesville, Ohio.