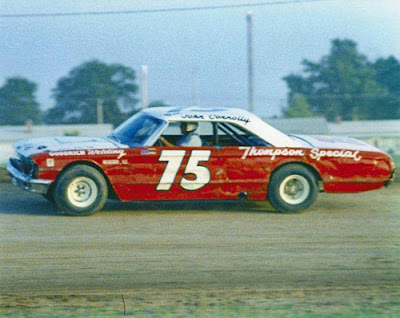 Sterling, Ill. (October 5, 1969) – John Connolly, from Delhi, Iowa, picked up the rich plum of $1,000 after winning the 100-lap CornBelt 1000 at the Sterling Speedbowl. The late model stock car race was managed and promoted by the staff of Rockford Speedway under the direction of Hugh Deery.

Connolly started on the pole after setting fast time in qualifying. His time of 18.34 seconds on the third-mile dirt oval stole top honors from Roger Dolan of Lisbon, Iowa, who was the first qualifier out with a time of 18.41 seconds.

Jim Gerber of Mt. Joy, Iowa, worked his way into second place by lap 65 and five circuits later, was able to work his way around the rim-riding Connolly for the top spot.

Connolly stayed with Gerber and kept the pressure on and finally on lap 87, Gerber’s Dodge Charger drifted high in turn three and Connolly shot back into the lead.

Gerber managed to recover to stay in second but had nothing for Connolly and his 1969 Ford. Connolly would take the checkers a full straightaway ahead of Gerber.

Earlier, Gerber won the trophy dash and received a 100-bushel truckload of shelled corn. He and promoter Huge Deery were knee-deep in the rich harvest for the presentation.