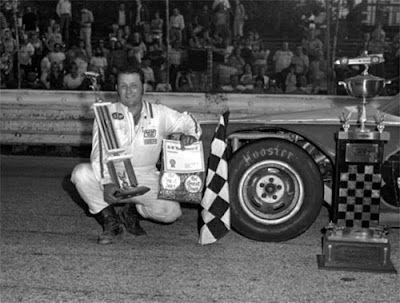 The 45-year-old veteran of over 20 years of racing put his Camaro into the lead on the eighth lap and led the rest of the way to the checkered flag for his second Bettenhausen 100 victory in as many years.

Rookie Bobby Dotter charged from his pole starting position to pace the 30-car field at the drop of the green flag. The 17-year-old son of ARCA and USAC competitor Bob Dotter stayed on through lap 7 before Young, who had started in row four, took command.

Joe Shear, Larry Schuler, Ed Hoffman and Jerry Kemperman followed Young to the front and moved in behind the frontrunner by the 12th circuit.

The event passed the 30-lap mark when the first yellow flag waved for Milwaukee-area based pilot Al Schill, who suffered mechanical woes and stalled in turn two.

When the green flag reappeared, Young continued to keep his mount out front with Shear, Schuler, Hoffman and Kemperman within striking distance. The battle continued until lap 43 when the engine in Tony Hertko’s Camaro let go.

Schuler would suffer a setback when his 1977 “Junkyard Dog” Camaro encountered fuel problems and stalled during the same caution. The incident cost Schuler a number of laps.

Young retained his frontrunning status on the restart, with Shear’s 1974 Camaro right behind. Following the pacesetting duo were Hoffman and Kemperman.

As the race progressed to the three-quarter mark, Young slowly began to pull away from Shear. Kemperman moved his 1976 Camaro past Hoffman to claim third on lap 75 and began zeroing on Shear.

Kemperman’s bid for second-place ended on lap 95 when a set of ground up quick change gears sent him to the pit area. One lap later Schuler, who seemed to have the fastest car on the track in the event’s late stages, fell out with differential problems.

At the finish it was Young, followed by Shear, Hoffman, Tom Musgrave and his brother Ted Musgrave.

Hoffman, winner of his third career Illiana late model driving championship in 1977, led all qualifiers for the event with a lap of 20.80 seconds around the paved half-mile oval.