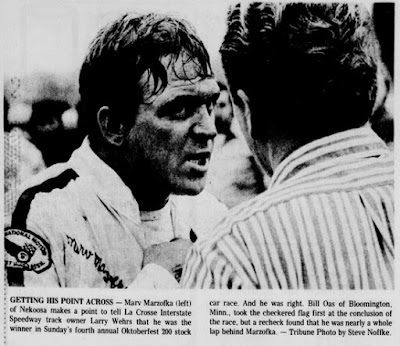 Marzofka, the Interstate point champion last year, used an early pit stop to his advantage and later brought confusion to much of the crowd of 2,300. He pitted during the 49th lap, under the yellow flag after a spinout by national short track champion Mike Miller of New Prague, Minn.

The result of that stop was that Marzofka trailed early leaders Larry Smith. Oas and Jim Back until he took over the lead for good on about lap 130 when Back and Oas were in the pits taking their mandatory stops.

In addition to the $1,500 first place payoff, he unofficially collected $710 in lap money ($10 going to the leader of each lap) and added payoffs from the fast dash and a heat race, bringing his weekend total to $2,340.

Smith started the race from the outside pole position and led through the first 57 laps before Oas took over. Smith fell back and eventually placed 10th. Oas maintained the lead for 32 laps before Back, this season’s track point champ, winner of five regular season races here and Saturday's fast timer, took command.

Back stretched the lead to nearly half a lap before pitting on lap 128, shortly before Oas went in.

Back got in and out of the pits quickly and was working his way through the pack towards Marzofka before engine trouble forced him out of the race on the 159th circuit.

Marzofka’s '73 Camaro had a commanding lead over Oas' Camaro throughout the rest of the race, but amid the confusion of pit stops, many thought that Oas had won. He was waved under the checkered flag first, about two seconds ahead of Marzofka.

But a recheck of the records found that Oas had lost nearly a whole lap to Marzofka while making his stop.

Even Marzofka’s pit crew was fooled. They signaled that he was running second late in the race, but the pilot knew better. “I was positive I was leading,” he said.

The early pit stop was part of his overall strategy. “Any time after 30 laps I was looking for a chance to pit,” he said.

Oas indicated that he was unsure of whether he was really running first or second at the checkered flag. He said he didn't know how much time Marv had spent in the pits, but hoped he was leading.

A total of eight laps were run the caution flag. There were no serious accidents in the feature race.