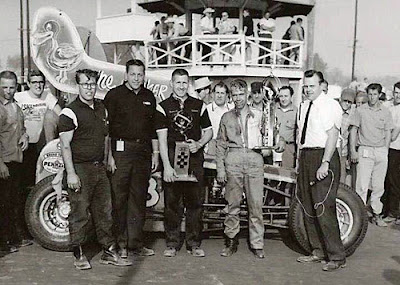 Tooling a 427-cubic inch Chevy, Johncock made the century grind with the 14th fastest qualifying time giving him that position in the 36-car field. He worked himself through the pack, reaching second spot on the 23rd circuit when the early runner-up, brother Nolan Johncock, also of Hastings, left the event with mechanical trouble.

For the next 10 circuits, Johncock rode on the tail of early pacesetter Dean Mast of Dover, Ohio. On the 33rd go-round, the eventual winner overtook Mast, coming off the fourth turn, going to the outside to do the job.

From that point on it was no contest as Johncock opened up a gap that reached a lap and a half at times. He turned in a 25.3 second lap on several occasions as he sped down the straightaways and through the corners on the low groove.