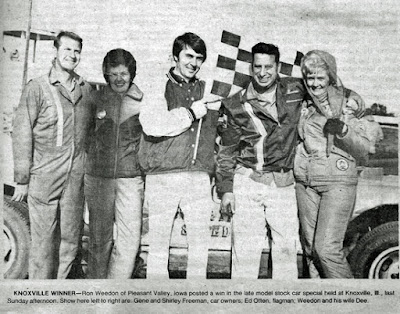 Knoxville, Ill. (October 2, 1977) – Ron Weedon, veteran late model driver from Pleasant Valley, Iowa, started on the outside pole position by virtue of his qualifying heat win, and went on to win the 20-lap feature event during the open competition special promoted by W.A.S. Productions at the Knox County Fairgrounds.

Weedon took advantage of a rough and dusty track to hold off Darrell Dake of Cedar Rapids, Iowa for the win.

Dake, who started on the pole, battled side by side with Weedon for the first few laps until Weedon was able to secure the top spot. Dake pulled in on Weedon’s bumper where he remained for the rest of the race.

Ron Jackson of Burlington, Iowa, ran with the leaders until midway through the race when he ran into visibility issue in lapped traffic and fell slightly off the pace finishing third.

Ray Guss of Milan, Ill., finished a distant fourth and Tom Bartholomew of Waterloo, Iowa, rounded out the top five.

John Connolly of Delhi, Iowa, came from well back in the pack to win the semi-main and qualify for the feature event. Dave Birkhofer of Muscatine, Iowa, finished second, also qualifying for the feature.

For Tom Herbert of Silvis, Ill., the semi was a heartbreaker. Herbert led for most of the race until he was passed by Connolly. He then was edged at the checkers doe second by Birkhofer, falling back to third and failing to qualify for the main event.

An excellent turnout of 39 cars were on hand for the open competition on a chilly but sunny autumn day.