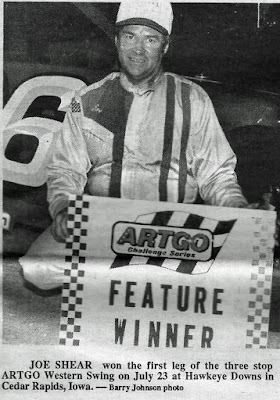 
It was the second win in two years for Shear at Hawkeye Downs. He also won last year's ARTGO event, the Miller 100.

Shear spoiled an attempt by Cywinski to pocket an additional $5,000 in prize money.

Cywinski had the night's fastest qualifying time, and opted to start from the back of the field. Had Cywinski won the race, he would have collected a $5,000 bonus. But Cywinski was involved in several mishaps and eventually finished 10th.

Shear and Weber did a two-car battle after Weber took the lead from Steve Holzhausen of Bangor, Wis., on the 47th lap. Shear passed Holzhausen and moved into second place one lap later.

Weber, who earlier in the night earned $1,000 by winning a three-race match series against Larry Phillips of Springfield, Mo., built as much as a two-second lead over Shear — but a yellow flag on the 91st lap tightened things up.


"I thought I was quicker and I thought I was reeling him in," Shear said. "But I don't think I'd have had enough time to pass him. It would have been tough without the yellow."

After overtaking him on the restart, Shear's Oldsmobile Cutlass was too fast for Weber's Cutlass. "I think it started to get faster as the race went on," Shear said.


"The win means a lot after the kind of year we've had," said Shear, who won for only the second time in 10 tries on this year's ARTGO circuit. "The crew needed this one. We haven't been able to make the car work and we've had a lot of engine problems."

Four Iowa drivers were in attendance Thursday, but only two made the final field of 24 for the main event.

Curt Martin of Independence, driving a Chevrolet Camaro, started on the outside of the second row and ran a smart, consistent race, finally finishing fourth. It is his highest finish in 10 ARTGO outings this year.


Johnny Spaw of Cedar Rapids also qualified for the main event but was lapped by the leaders and finished 18th.

A $1,000 challenge race between racing veterans Weber and Larry Phillips of Springfield, Mo., was also part of the evening's program.

The two drivers, both in their early 50s, competed in a best-of three series of three-lap races, with the winner carting home $1,000.
Weber, second in the ARTGO point standings coming into the Pabst Light 100, won the first and third races — both from the inside — and grabbed the prize money.