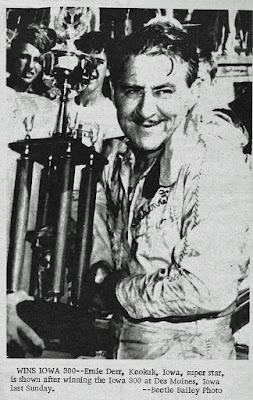 Des Moines, Iowa (July 13, 1969) – Three drivers made Ernie Derr of Keokuk, Iowa, work exceptionally hard under 94-degree weather conditions at the State Fairgrounds on Sunday afternoon.
But the old master took charge in the last 85 rounds of the Iowa 300 new model stock car race and won in a record time of 2 hours, 23 minutes and 51 seconds.


Ron Hutcherson of Keokuk, Iowa, Ole Brua of Albert Lea, Minn., and Fred Horn of Marion, Iowa, were the challengers in the 150-mile grind. The lead changed hands 11 times and all four drivers shared the honors.


Horn, driving a 1967 Plymouth, finished second, one lap behind Derr’s 1969 Dodge Charger and pocketed $800. Brua, in a 1969 Ford Torino, fell 11 laps behind the leader in the stages of the race but finished third. Hutcherson, who put up the stiffest challenge, had mechanical troubles and was fortunate to finish seventh. He was third with 40 laps remaining.


The heralded duel between Derr and Tiny Lund, the Harlan, Iowa, native, who calls Cross, S.C., home, did not materialize.


Lund, the 1968 NASCAR Grand National Touring champion flew into Des Moines on Sunday morning. However, his 1969 Cougar did not arrive. Lund encountered rear end difficulties at a race in Atlanta, Ga., on Friday night and by the time the car was repaired, there wasn’t enough time to tow it to Des Moines.


But Tiny hopped into a 1967 Ford Fairlane borrowed from Dick Johnson of St. Paul, Minn., and proceeded to show the 12,100 race fans in attendance how the NASCAR boys run.


Tiny did a heck of a job for his time in the saddle – which wasn’t long. A ball joint broke and he slammed into the wall on lap 11.


He had qualified 17th but moved up to fourth and did tail Derr’s bumper for a couple of laps.


Brua had the lead until lap 22 when Ernie sailed around him. Derr took a mandatory 30-second pit stop on the 70th lap and Hutcherson nabbed his first lead.


Action was fast and furious from lap 80 through lap 121 when there were numerous changes for the top spot.


Derr charged ahead at that point and he, Hutcherson and Horn battled on the same lap through lap 174 when Derr pitted and Hutcherson assumed command and led Derr by more than a lap


Derr managed to whittle away the lead and took advantage of Hutcherson’s pit stop for water on lap 215 to move ahead permanently.


Mike Derr’s racing debut was a success. The son of Ernie, who had never driven a race car on a track before the race, finished in fifth. Together they earned $1,450 for the race with Ernie taking home $1,100.