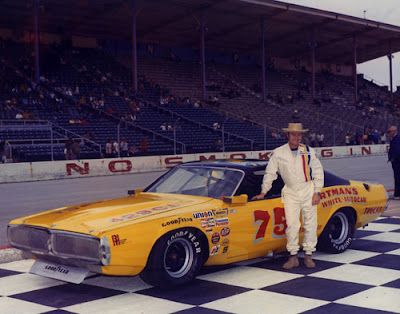 Milwaukee, Wis. (July 14, 1974) – Butch Hartman of Zanesville, Ohio, who won four stock car races at Wisconsin’s State Fair Park last season, posted his fifth victory in a row on the paved one-mile oval in a United States Auto Club 200-mile event Sunday.
But Hartman, who took advantage of car troubles by his closest competitors to win by half a lap at an average speed of 86.884 miles per hour, said he never thought the $10,019 he won of the $54,950 purse was a sure thing.

“At no point was I confident,” he said. ‘Even in those last 10 laps when I was out in front, I was nervous. Nothing is certain.”

Hartman took the lead in his 1974 Dodge Charger from pole sitter Bobby Unser after 35 laps, and Unser eventually left the race with a broken valve on his ‘74 Charger.

Then, after Hartman went into the pits, Dick Trickle of Wisconsin Rapids went out front from the 87th through the 117th laps. Trickle remained close behind in his ‘72 Charger until spinning out during the 143rd lap on an oil slick which appeared when the ‘72 Charger of Paul Feldner of Richfield blew its engine. Trickle’s car hit the wall, but he walked away uninjured.

Hartman’s final challenge came from Ramo Stott of Keokuk, Iowa, who was hampered by brake trouble in his ’72 Plymouth towards the end of the race.

“Ramo was backing off a lot of times in the turns and the way the flagman was positioning himself, I knew he just didn’t have those brakes. It was one heck of a race that Ramo drove.”

Norm Nelson of Racine finished third. He was hampered when he made a stop on the 50th lap, picked up a piece of metal while leaving the pit area and had to return only three laps later with a flat tire. Nelson felt the untimely flat cost him at least second place, possibly better. He had just taken the lead on the 50th lap before making a pit stop for tires and gas.

Only 19 of the 40 starters were still running at the finish.