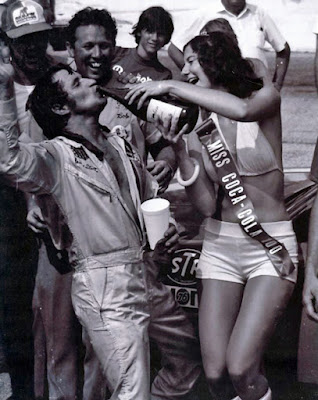 Ramo Stott sips champagne after winning the Coca-Cola 100 at Salem.

Salem, Ind. (July 7, 1974) – Ramo Stott of Keokuk, Iowa, grabbed the 100-lap United States Auto Club stock car feature at Salem Speedway on Sunday afternoon.
Stott drove his Plymouth into the lead on the 68th lap of the 100-lap feature when Larry Moore, who had led in his Chevelle from lap 11, dropped out of the race.
Stott averaged better than 79 miles per hour, finishing 13 seconds ahead of Bob Schippers of Kalamazoo, Mich., who was in his first race on a high-banked half-mile paved oval.
USAC stock car point leader Butch Hartman, who qualified his Dodge on the pole with a new track record of 91.13 miles per hour, stayed in front of the 20-car field through the first 10 laps.
Norm Nelson edged out a fading Hartman for third place. Mickey Flora led Don White to the finish for fifth. All were one lap behind Schippers and the leader.
Don White took sixth, and Cedar Rapids, Iowa, driver Irv Janey finished seventh.
There were only two cautions, one for a crash involving Ken Rowley and the other for George Coonrod’s spin. Neither driver was injured.
NASCAR star Bobby Allison battled handling issue with his Chevelle all day and would complete only two laps and finish 19th.
Stott was expected to receive almost $3,000 for the victory out off an estimated $10,000 purse.
A huge crowd, estimated at 8,000, packed the tiny speedway and were treated to a sun-drenched afternoon of racing. 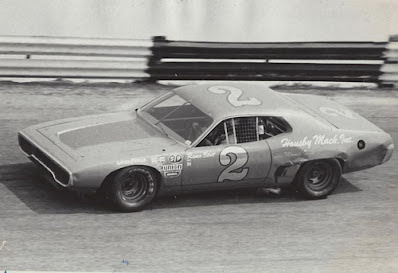