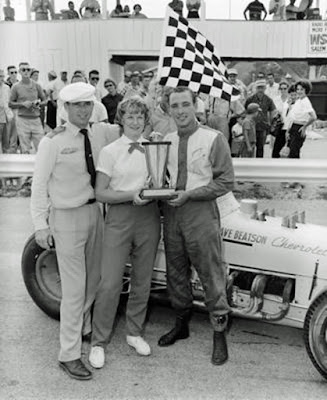 Salem, Ind. (July 15, 1962) – Johnny Rutherford of Fort Worth, Tex., drove his Beatson Chevy to first place here in the 30-lap IMCA big car feature in a new record time of 10 minutes and seven seconds, erasing the old mark of 10 minutes and 33 seconds set in 1954 by Buzz Barton of Tampa, Fla.
Rutherford, who started fourth by virtue of his qualifying and winning the third heat, took over the lead when Johnny White lost his engine in the Chet Wilson 270 Offy.
The Warren, Mich., speedster led laps 9 through 20 after initial leader Tom McClellan of Dayton, Ohio, spun out in the first turn after starting in the pole position. McClellan posted the fastest lap in qualifying, turning a time of 19.17 seconds on the high-banked half-mile.
Arnie Knepper of Belleville, Ill., was chasing Rutherford by a few car lengths as the checkered waved. Filling out the top five were Bill Kimmel, Dick Gaines and Ray Duckworth.
Winner of 10-lap heat were Rutherford, White, and Duckworth. Gaines captured the 10-lap semi-feature. Knepper accounted for the 5-lap trophy dash.
Tom York of South Bend, Ind., driving a powerful Pontiac, brought the 4,000 spectators to their feet when his steering let go in his heat race and smacked the wall in front of the grandstand. York was uninjured but the car wasn’t so lucky.
Rutherford, who has been doing a terrific job this season, extended his points lead in the IMCA national championship race and will be a tough customer to beat.