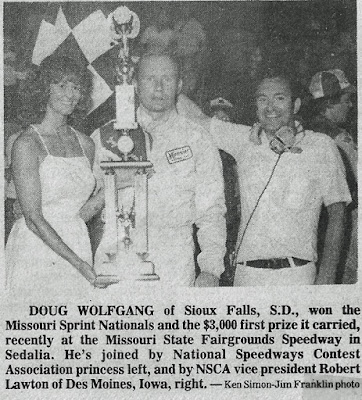 Sedalia, Mo. (July 25, 1981) – Doug Wolfgang of Sioux Falls, S.D. capped off a successful two-day race program by winning the 30-lap feature finale of the Missouri Sprint Nationals at the Missouri State Fairgrounds on Saturday night. The 28-year-old hotshoe collected $3,000 for the victory.
Wolfgang was far faster than any other car competing in the Friday/Saturday event and he literally drove away from a field of the best cars and drivers in the country.
He did have one problem in winning the 30-lap main. He would run out of fuel on the last lap but was able to coast to victory without threat from runner-up Danny Smith of Hendersonville, Tenn.
Wolfgang and Sammy Swindell of West Memphis Tenn., were the front runners in the race until the 27th lap when Swindell’s right rear tire blew. He returned and finished sixth, having passed most of the competitors in the earlier go-rounds.
But Swindell’s time consuming tire change plus time spent earlier to clean up a wing that flew off the car belonging to Dick Howard of Kansas City, took its toll on Wolfgang’s fuel tank.
“I wouldn’t have won the race had we gone one more lap,” said Wolfgang, who was spending the last few hours of his 28th year – he turned 29 on Sunday.
“I knew I was in trouble the last few laps. This is the second time this month I’ve run out of fuel. The other time was at I-70. I won there, too.”
Throughout the main event, Swindell managed to get around Wolfgang a couple of times – he caught up when Wolfgang got into heavy traffic, but they were very short-lived leads. Swindell’s car was not in the same class as Wolfgang’ on this particular night. Wolfgang would stomp the pedal and he was off again, leaving Swindell wondering what was wrong.
Shane Carson of Oklahoma City, who started on the front row with Wolfgang, finished third, Ken Schrader of Fenton, Mo., took fourth and Bobby Marshall of Dallas, Tex., rounded out the top five.
National Speedways Contest Association conducted the program but the event was well represented by the World of Outlaws and the United States Auto Club.