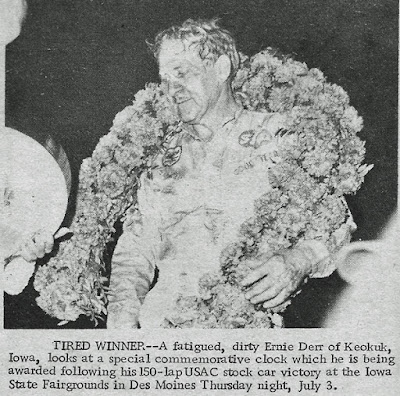 Des Moines, Iowa (July 3, 1975) – Ernie Derr of Keokuk, Iowa, driving a Dodge, took the lead from Cedar Rapids, Iowa’s Darrell Dake on lap 111 and then led the rest of the way Saturday night to win the Bulldog 150 for USAC late model stock cars at the Iowa State Fairgrounds.
Dake, who started on the outside of the front row, passed early leader Gordon Blankenship on the fourth lap was well on his way to victory before a shredded tire caused him to make an unscheduled pit stop on lap 111. He eventually needed another pit stop with nine laps to go and placed fifth.
Keokuk, Iowa’s Ramo Stott, racing race organizer Jack Housby’s Plymouth, finished one lap behind Derr for second place. Jack Bowsher of Springfield, Ohio, was third followed by Don White, also of Keokuk.
USAC late model stock car point leader Butch Hartman of South Zanesville, Ohio, was running second when he was forced out at the 125-lap mark with rear-end problems.
Blankenship paced the 30 qualifiers with a time of 26.36 seconds over the half-mile dirt oval. Dake won a 4-lap trophy dash and Bay Darnell of Deerfield, Ill., won the 15-lap semi-feature.