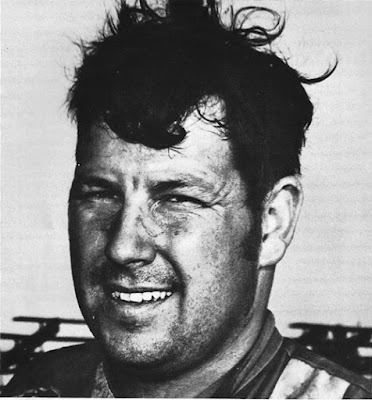 Gordon Blankenship
Cresco, Iowa (July 16, 1972) – The record book for the Howard County Fair racetrack was freely written on Sunday night.
The weather was perfect, the track was fast and Gordon Blankenship of Keokuk, Iowa, bettered the records of his Keokuk neighbors, Ramo Stott and Ernie Derr.
Stott’s record was the first to fall. Blankenship sliced more than 25 seconds off the existing record for 10 laps, by turning the fast time of 3 minutes and 11 seconds.
There was a break in the action, the crowd was catching its breath and Gordon Blankenship was making some last-minute adjustments to his machine.
Derr’s record was the next to fall. Blankenship, driving like he was truly inspired from his third-place finish in the Iowa 300 a week ago, led the feature race from start to finish.
In the early going Blankenship sat on a comfortable lead as the pack was wrestling and jostling for position. It was on lap 34 that Gordy, trying to weave through lap traffic, skinned the wall in turn four, sending sparks flying into the crowd.
Irv Janey of Cedar Rapid, Iowa and Gerry Harrison of Topeka, Kan., closed in on Blankenship by lap 36. Despite Janey’s serious challenges throughout the remainder of the race and even though he was within inches of the leader, Blankenship denied his every effort.
Blankenship took the checkers and set a new track record in the process, turning the 50 laps in 39 minutes and 41 seconds, bettering Derr’s record of 41 minutes flat.