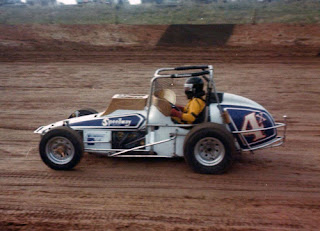 Wolfgang, who vaulted into the lead at the drop of the green, was still in command after 27 of the event’s 40 laps, when rain forced the contest to be halted.

Roger Rager, who was gunning for a clean sweep of the show after having set fast time in qualifying and capturing the first heat, was credited with finishing second, ahead of Billy Cassella, Chuck Gurney, and Bill Engelhart.

Rich Vogler, the current USAC midget point leader, flipped his car during hot laps, but was uninjured and came back later in the evening to finish tenth.