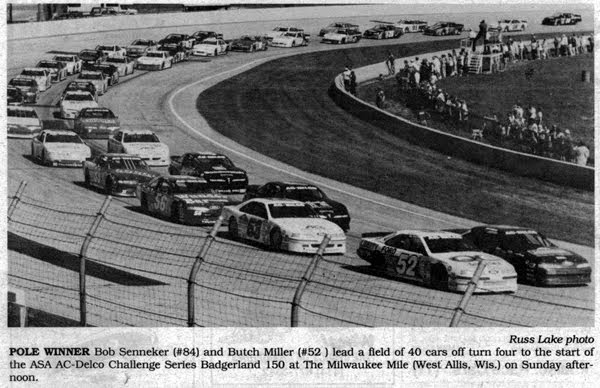 West Allis Wis. (August 28, 1994) - It's only appropriate that the driver whose car is sponsored by Johnsonville Sausage won the Badgerland 150.
As Charlie Murphy used to cook the bratwurst for his entire block in his sponsors' old commercials, the Ford Thunderbird of pole sitter Bob Senneker cooked the Badgerland field over the final 27 laps at the Milwaukee Mile to pick up his first American Speed Association victory of the season and the 75th win of his career.


It was the first victory for Senneker at the Mile since July 14, 1991, and the eighth time a pole-sitter has won in 27 ASA races at the Mile.


"It was rigged," joked Senneker. "So was qualifying. I didn't go that fast yesterday, they just put that time on the clock."


The last thing Senneker, the winningest driver in the 26-year history of the circuit, needs is help from sponsors to win a race. But he did get help from a late caution flag and a new set of tires to beat National Association for Stock Car Auto Racing driver Ken Schrader by 2.36 seconds.


"I didn't have as good a set of tires after the first pit stop as I did at the beginning of the race," Senneker said. "We had an awesome pit stop late in the race and changed the stagger a little bit."


Before a competition yellow caution flag came out on lap 115, ASA point’s leader Butch Miller and Schrader were pulling away from the field and preparing for a shootout over the final laps.


The yellow flag brought Miller and Schrader back to the field. The competition yellow, an ASA rule which puts the race under caution after a certain amount of laps are run (at Milwaukee it's 50, at smaller tracks it's different) to give the race a better chance to be won on the track and not in the pits.


Senneker, who was fourth on the restart, then overpowered the field the rest of the way. Mike Eddy followed Schrader home in third, Bangor's Steve Holzhausen was fourth, Harold Fair was fifth and Miller was sixth.


"I don't run enough (ASA) races to say if it's a good rule," Schrader said. "But a rule is a rule. It happened with 35 laps remaining, when if something could happen, it probably would happen anyway."


Schrader, a regular on the Winston Cup circuit, completed a six-day run of racing that would make frequent-flyer junkies salivate.


After a day off following the Goodwrench 400 in Brooklyn, Mich., last Sunday, the Concord, N.C., resident began a trek which took him to Sheboygan County Fair in Plymouth on Tuesday, Missouri on Wednesday before moving on to Tennessee where he raced Thursday, Friday and Saturday.


He moved to the half-mile banked oval in Bristol for Friday's Busch Grand National race, stayed there, and finished 19th in the Winston Cup Goody's 500, his worst finish of the week.


"It was a fun weekend," the weary one said. "I finished the worst in the race where I get paid the most."


Senneker, the first ASA driver to top the $1 million mark in earnings, was happy to end a rare victory drought that lasted more than 14 months.


"We have been fast all year long but we would have some minor mechanical problems or get caught up with another car on the track," he said. "We've been knocking at the door; I knew the win had to come."