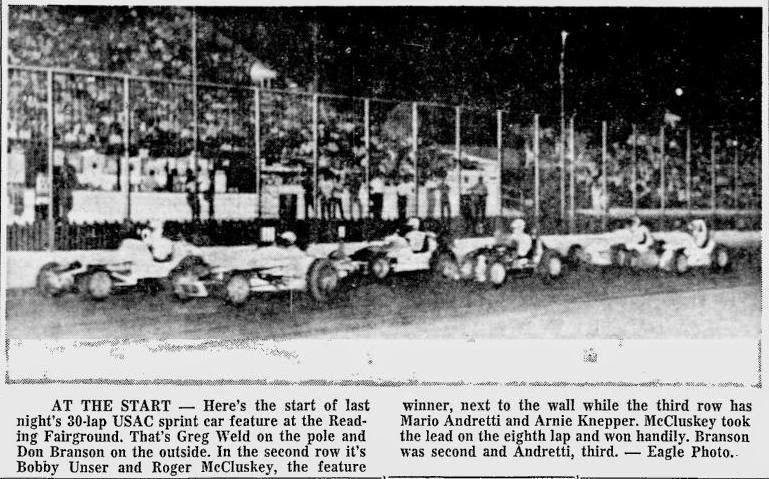 (August 6, 1966) – Point leader Roger McCluskey of , hustled his way to first place on lap 8 and then went on to win the 30-lap USAC sprint car race before 5,500 fans at the Reading Fairground.


Young Greg Weld of , who had the fastest qualifying time and set a track record in the first heat, was running second in the feature when he broke a cam gear  in the third turn on the final lap and coasted to the finish line to take sixth.


Second place was inherited by Don Branson of , who had led for the first 7 laps until McCluskey passed him and then ran second until Weld snuck by him on lap 25.


National champion Mario Andretti of , finish third after running fifth until lap 29 when he sneaked by Bobby Unser of Albuquerque, N.M., and then advanced one more spot after Weld dropped back.


Unser would settle for fourth place while Larry Dickson of , was scored in the fifth spot.


McCluskey’s winning time for the 15 miles was 12 minutes and 11 seconds.


Branson, who started on the outside of the front row, beat Weld to the first turn and managed to hold the lead until McCluskey slipped underneath him in turn four of the eighth lap.


The only close call during the entire program came during the main event on lap 14 when Andretti ran into the rear wheel of Bobby Unser as the two battled down the home stretch. But both were able to keep their cars under control.