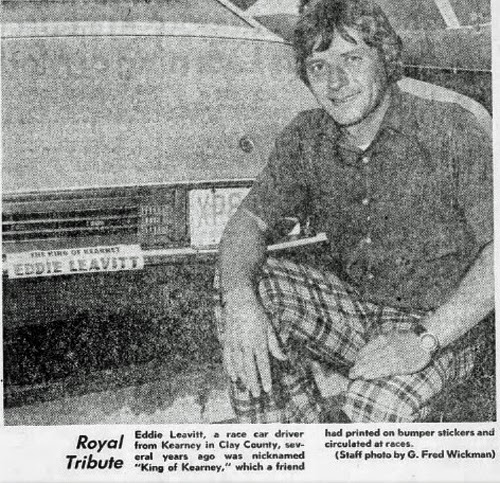 (August 27, 1975) – The “King of Kearney” does not ride in a luxurious coach pulled by four sources but in race cars which ply race tracks across the country.


The royalty is Eddie Leavitt and there are bumper stickers and no words of racecar fans to prove it. His title stems from his residency in the town of 984.


“Fred Broski (now a television announcer here) started that (the nickname) a long time ago,” Leavitt, 32, said. “He was announcing races at Olympic Stadium in . He started called me a “King of Kearney”. I think more people know of me as the King of Kearney then as Eddie Leavitt.”


That was about six or seven years ago, he said. Helping the nickname along about three years ago was a printing a bumper stickers proclaiming, “The King of Kearney - Eddie Leavitt”.


The stickers first appeared at a race in as a result of efforts by a friend of his who is a printer, Leavitt said.


“All of a sudden one weekend there are bumper stickers all over, “Leavitt mentioned. “I'm sure no one knew where was or who Eddie Leavitt was.”


He said the bumper stickers have followed him around; making him almost one-man Chamber of Commerce for . He races on a super modified circuit in the but also races in , , , and .


“It's () a nice town but it is really booming,” Leavitt said. “It's doubled what it was nine years ago.”


He moved to when he started to work for his father who owned a wholesale propane company there. Now Leavitt has his own trucks which haul propane for Ferrelgas, Inc., out of and .