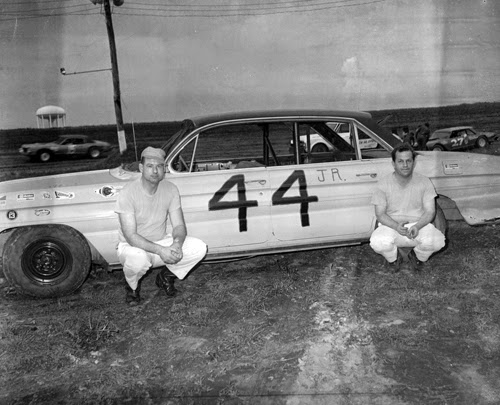 Dale DeFrance
Boone, Iowa (August 12, 1972) - All the usual winning drivers were in the super late model feature at the Boone Speedway, but there was nothing they could do to take the first spot away from Dale DeFrance of Marshalltown.


DeFrance is a regular at the Boone oval, but this was his first feature win. Until Saturday night he had won only three events this year - all B-Mains - and last year won only one heat race.


Starting in the outside spot of the front row, he grabbed the early lead and stayed there despite the efforts to get around by Arnie Braland of Boone, Denny Hovinga of Laurens and Greg Davis of Boone, who finished second through fourth, respectively.


DeFrance became the sixth driver to win the feature event at Boone this year (excluding the Grand Nationals). Hovinga, the point leader, has won six, Braland has been first two times, Gene Schattschneider of Algona has won twice, and Greg Davis of Boone and Rich Simpson of Burt each have won the feature once.


Schattschneider had been in the battle for second behind DeFrance earlier in the race, but clashes with two other Algona drivers finally put him out of the running.


The first tangle came with Wayne Meyer and the Flying Dutchman getting together in the number two turn, with both cars continuing but dropping back out of immediate contention.


Schattschneider had also been involved in an accident in the first heat when Arlo Dorenbush of Boone got crossed up ahead of him and Schattschneider ran into him, getting hit in turn by a third car. The Algona driver was knocked out of the running, but came back to win the B-Feature.


In the second heat, Hovinga and Del McDowall of put on one of the hottest contests of the night. McDowall had taken the lead away from Gary Lindgren, , after four laps, with Hovinga working his way up through the pack. Bunkofske was challenging McDowall for the lead by going to the inside, but couldn’t make it. Hovinga moved into a side-by-side fight with Bunkofske for second.


The Laurens driver was having trouble holding the front end of his car down in the turns of the slick track, but finally got by Bunkofske and then dove inside McDowall for the lead.


McDowall came right back in the next turn to go inside to regain the lead, but Hovinga took over on the back stretch and held the lead the rest of the way, with McDowall staying right behind him.