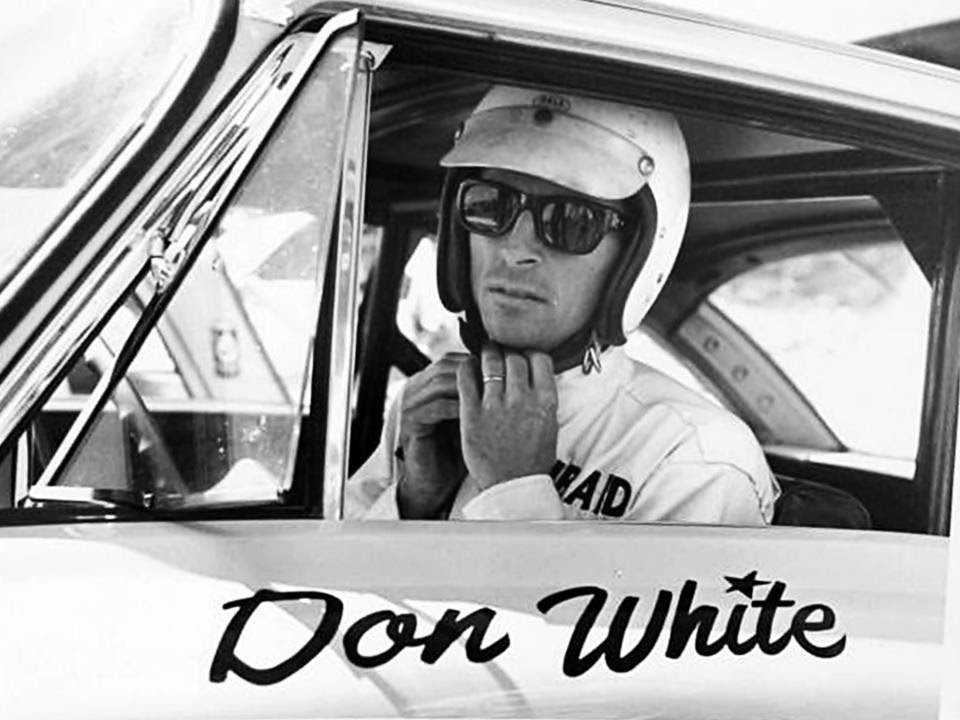 (August 14, 1960) - Don White, who hails from where the “Tall Corn Grows” did a lot of earth plowing as he charged home ahead of a blue ribbon field in the 100-lap stock car feature race yesterday afternoon at the Terre Haute Fairgrounds track.


A crowd estimated at 10,000 saw White catch Les Snow on the ninety-third lap and roar to the front to get the checkered flag in near-record time.


White, hailing from Keokuk, Iowa, picked up the winner’s check for the fourth straight time in stock car races and shot into contention for the USAC national stock car championship. White’s victory was worth 100 points on the championship trail and he moved into third place in the standings ahead of Rodger Ward. Ward was a visitor at the track yesterday, but was unable to race because of an eye infection.


Driving a 1960 Ford, White was clocked in 50 minutes and 48 seconds for the 100 laps. His time was a little more than a minute and a half slower than the track record set by Nelson Stacy last year. White crossed the finish line some 200 feet to the good of Snow, who drove the last 30 laps with a broken sway bar on his 1960 . Until his car developed mechanical trouble, Snow had led the greater part of the race.


Snow charge ahead of the pack on the fourth lap and stayed ahead until Paul Goldsmith caught and passed him on lap 43. But Snow regained the lead the very next lap. But after a broken sway bar forced him to drive a more cautious race, Snow saw a lead of nearly half a lap, slowly shrink.


White and Tony Bettenhausen, meanwhile had staged a terrific duel between them for the number three spot and at times were only about 100 yards back of the leaders.


Bettenhausen, driving a 1958 Ford owned by Rodger Ward, hung on to the third spot until the forty-fifth lap when White passed him. The White-Bettenhausen duel was going on while Snow and Goldsmith were running tail to tail up front.


After Goldsmith had gained the lead and then lost it again, the driver experienced mechanical trouble. A sway bar broke on his 1960 Pontiac and he went into a bad spin coming out of turn two. He managed to keep the car under control but was later forced to make a pit stop for a tire change. Goldsmith lost ground during the pit stop and later a tire blew out on lap 96 and forced him out of the race.


Snow added to his second-place money by winning the first of two 10-lap heat races. After Nelson’s car developed mechanical trouble on the fifth lap, Snow shot to the front and got the checkered flag ahead of Bill Cheesbourg and White. Snow's time was 4 minutes and 58 seconds.


Sal Tovella, driving a 1960 Ford, won the second 10-lapper. Al Swenson was second. Elmer Musgrave was third. The time was 5 minutes and 10 minutes.


Cheesbourg won the 4-lap trophy dash, finishing ahead of White and Rostek in the time of 2 minutes and 40 seconds.


Bettenhausen started in the trophy dash but was forced out on the second lap when the differential went out on his car. His mechanics did a quick repair job in order to get the car ready for the remainder of the program.


Goldsmith set a qualifying record for the track with a 28.13 second clocking, breaking the old mark set by Stacy last year.