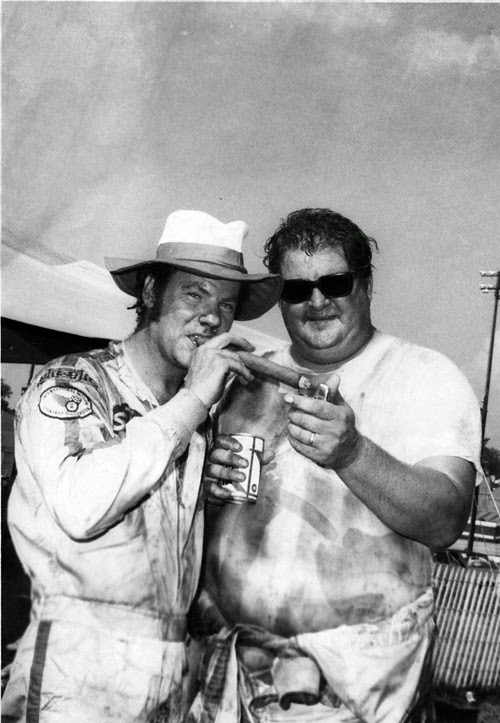 
Des Moines, Iowa (August 19, 1972) - Irv Janey of Cedar Rapids overcame a jinx and his boss, John Moss of Iowa City – who weighs about 300 pounds and stands 6 feet 4 inches – was overlooked for a while Saturday afternoon , but everything turned out fine.


People responsible for keeping the estimated crowd of 7,000 informed about the leaders did not have Big John listed in the top five at the finish.


“I knew I was at least third,” the smiling Moss said as he rested in a chair among a throng of cheering fans as the official results were disclosed.


Someone handed him a foot-long cigar; “I knew I was passing all those leaders on the board at the last and I got at least two laps on Fred (Horn),” he said.


Moss and Marty Sixt, also of , own the cars which Janey and John drove.


They are sponsored by Advanced Drainage Systems of Iowa City.


“It’s about time I won a race here (at the Fairgrounds),” Janey said. “I’ve been so close in the 300 and at the fair specials for the past three years. It sure feels good to win one here.”


He had led much of the “300” earlier this summer but was sidelined because of transmission problems.


Janey led twice Saturday; lap 24 through lap 80, and lap 153 to the finish of the race. But the current IMCA point leader was not without problems.


“We have a new engine in the car and it was heating up a little,” he said. “I slowed down a little, but I finally decided to go flat out and see what happened.”


Horn was disappointed. He took the lead from Janey on the eighty-first lap and held it until Janey went around him on the backstretch on the 152nd lap.


“I had that one won,” Horn said, “but the car started heating up and I had to slow down. That’s the breaks.”


Horn took advantage of a yellow flag and quick pit stop and led Janey by more than a lap at one point. But Irv managed to pass Horn once and then worked around again to cut the margin to less than a half-lap.


Then, Bill Stahl of , lost a wheel, bringing out the yellow and allowing Janey to close in for the kill as Horn started to slow because of the heating problems.


Gerry Harrison of , was so exhausted after the race, paramedics had to administer oxygen. Bill Harrison, his father, poured several buckets of water over his son in efforts to cool him off.


would finish fourth while another overheated driver, Gordon Blankenship of , would jump out of his car immediately after and have buckets of water dumped on him as well.


Mike Lutkie of , took the initial lead in the race. took over on lap six and held it until Moss slipped by on lap 14. Janey would pass “The Boss” on lap 23. This was Moss’ first IMCA competition of the year.