1984 – Al Schill took command of the lead on lap 25 and went on to capture the Firecracker 75 late model event at Slinger (Wis.) Speedway on Sunday night, July 1. Defending winner Fred Winn took the early lead followed by Gerry Wood and Lowell Bennett. By lap 15, the top qualifiers were near the front of the pack as John Ziegler, Conrad Morgan and Schill were in the top five. Schill and Ziegler moved into second and third respectively on lap 20 and immediately began to close in on Winn. Five laps later Schill overpowered the leader and began to pull away from the rest of the pack. Morgan would close the gap on Schill with 10 laps to go, but Schill would win by three car lengths at the checkers. Morgan, J.J. Smith, Willie Goeden and Tony Strupp would round out the top five. 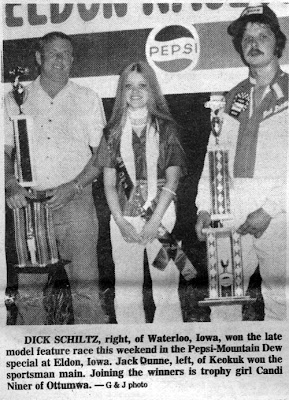 1979 – Dick Schiltz of Waterloo, Iowa, earned a hard-fought victory over a stellar field of late models to win the Pepsi-Mountain Dew Special at Eldon (Iowa) Raceway on Saturday, June 30. Mike Niffenegger of Kalona, Iowa, would set a blistering pace for the first 5 circuits of the 35-lap contest until he lost power, shuffling back to third place. At that point, Lem Blankenship of Keokuk, Iowa, took over followed by Schiltz. Just before the halfway point, Blankenship, with a straightaway lead, lost power as well and was forced to pull into the infield. This gave the top spot to Schiltz, who then had to fight off a persistent Roger Dolan of Lisbon, Iowa, for the remaining laps. Schiltz would cross the finish line by no more than half a car length. Dolan would wind up second followed by Dan Dickey of Packwood, Iowa, Niffenegger, and Denny Banks of Washington, Iowa.

1974 – Lonnie Jensen got by Jerry Richert Jr. on lap 16 of the 20-lap main event to win the Midwestern Sprintcar Association (MSA) feature at North Starr Speedway near Minneapolis, Minn., on Sunday. June 30. It was the first MSA victory for the Lincoln, Neb., chauffeur and it paid $500. Richert took off from the outside front row at the drop of the green and held off all comers until Jensen moved within striking position on lap 12. Barry Kettering, who started ninth, joined the two pace-setters by lap 14 and all three drivers sliced and diced until Jensen was able to secure the top spot for the win. Richert, Kettering, Don Mack, and Bob Hop would round out the top five. 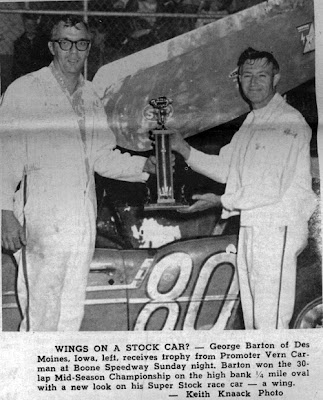 1968 – George Barton of Ankeny, Iowa, won the 30-lap mid-season championship for the super stock division on Sunday, June 30. Even though he led every circuit, Barton’s win was hard fought all the way as he had to fend off two Ames, Iowa drivers, Curt Houge and Bill Holder for the victory. A crowd announced at 2,400 turned out to watch a fine field of 45 super stocks put on an entertaining show on the high-banked quarter-mile dirt oval. Rich Green of Webster City, Iowa, Paul Uhlenberg of Garwin, Iowa, Dan Clement of Rhodes, Iowa, and Buggy Vincent of Nevada, Iowa, were heat winners while Uhlenberg won the B-main.