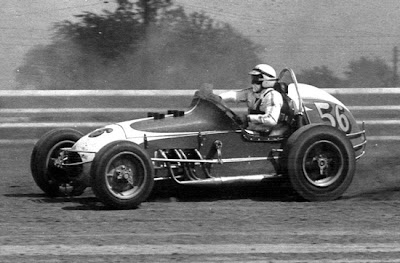 Terre Haute, Ind. (Jun 11, 1961) - Jim “Hercules” Hurtubise, the 1960 rookie of the year in the Indianapolis 500, jumped into the lead early from his second place starting position and went on to win the 30-lap USAC-sanctioned sprint car race at the Vigo County Fair Ground track yesterday afternoon.

The Lenox, Cal., driver accelerated his Chevy-powered roadster around the 15-mile dirt course in 13 minutes and 13 seconds. He won the same event last year with a time of 13 minutes and 26 seconds, and holds the second fastest qualification time here to date.

The day of racing was marred by an accident involving Wayne Weiler of Phoenix, Ariz., on the third lap of the first heat race. Weiler’s new A. J. Watson-built car, in its first race, ran its left front tire over the right rear tire of the Hurtubise car, overturning the car twice and injuring the driver seriously. No other drivers or cars were impaired by the accident.

Weiler was rushed to St. Anthony Hospital where he is in serious condition. Hospitals officials last night reported that Weiler, still unconscious, had sustained a fractured jaw and head injuries.

Leon Clum, who started on the pole, followed closely behind Hurtubise the entire race to take second place. Parnelli Jones of Gardena, Cal., piloted his Fike Plumbing Special Chevy to the third spot.

A. J., behind the wheel of an Offy, directed the machine to fifth placed in a field dominated by larger displacement Chevy V-8’s. He was followed by Cecil Beavers and Roger McCluskey respectively.

The first eight-lap was won by Clum, the fastest qualifier of the day. Hurtubise and Parnelli Jones took second and third, due to the accident and the replaces in the heat, respectively was taken.

A. J. Foyt won the second heat, starting at the pole. He was timed at 3.22.60 over the four-mile course. Leroy Neumeyer of Compton, Cal., placed second and Roger McCluskey moved up from fourth place to third spot.

Danny “Termite” Jones gave the fans a thrill as he directed his sprinter from eighth place to win the 15-lap semi-feature. The “Termite” chewed his way through the first turn traffic, passing four cars in the contested arena. Cecil Beavers also moved up in the field from fifth to second, while Calvin Gilstrap of Salem dropped from second to third place.

Leon Clum led off in the qualification trials and turned the fastest time of the day. His fastest lap was 24.06 seconds. The track record stands at 23.70 as set by Van Johnson in 1959.

Other qualifiers under 25 seconds included Hugh Randall, Weiler, Neumeyer, McCluskey, Jones and Foyt. Neumeyer, on the Terre Haute track for the first time, spun out in the first lap of his qualification, and went out on his remaining lap after a pit stop to collect one of his better times of the day, a 25.30 bid.

In attendance was Anton Hulman Jr., president of the Indianapolis Motor Speedway, who rode in the pace car driven by racing great, Rodger Ward.