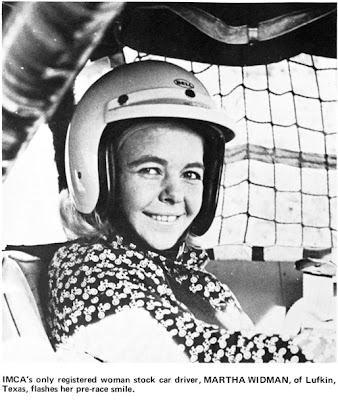 Des Moines, Iowa (June 24, 1973) – Martha Widman says she’s scared to death about racing in the Firecracker 300 at the Iowa State Fairgrounds the night of July 4, but she’s happy about one thing – she no longer has to sneak into races in which men compete.

“Man, that’s going to be along race,” she drawled into the phone Saturday from her office at the Lufkin, Tex., Yellow Cab headquarters.

“But I reckon I can handle it. I've been scared before, and I came through all right. I know what I have to do to finish.”

She also is the known woman driver to run the International Motor Contest Association circuit and may become the first woman to compete at the Daytona International Speedway in a NASCAR race. She hopes to race there next year.

She already holds a NASCAR license, but they won’t let her race at Houston, Tex., where some NASCAR-sanctioned events are held.

The Firecracker 300 is a continuation of the annual Iowa 300’s. The name was changed when the race – number 17 in the series – was switched to July 4 for this year. The distance is 150 miles around Fairgrounds’ half-mile dirt track.

“I started racing on a one eighth-mile track,’ she said, and I don’t really like half-mile tracks. And, I do better on asphalt tracks than I do on dirt. But, I'll be there. Ya'll can count on that.”

Martha said she started racing in 1964 when her husband, Glenn, “dared me” to race in a powder puff derby.

“He borrowed a car for me and I tore it up. But, I liked racing so well, I went back the next Saturday night and finished second.

“After the third race, I bought a pink Mercury and I won every race (12) that I ran the rest of the season.”

She started “sneaking” into men’s races four years ago. “My husband had his own car by then, so one night I thought I would race it in the feature,” she said. “I finished second and the men didn’t like that. They hated that. They wouldn’t let me run, unless I sneaked in.”

“I set the track record for qualifying one night. Until the track was changed to a quarter-mile, the men were reminded of that every race night. They didn’t much care about that either.”

Martha said she won eight championships, all against women. But, it reached a point where the women of Lufkin, as well as the men, would not compete if Martha ran.

“The men didn’t want to get beat by me,” she said, “and the women just couldn't compete with me any more.”

Last October, Martha entered the Beaumont 100, her first big race against men. “I wrote in and asked for some rules,” she said. “The promoter sent them and they did not say women were excluded. I called him and asked if those were the only rules. He said they were, and I told him I would be there. He’d like to have died, but he let me run.”

“The track was so rough the clutch linkage vibrated off and then the brakes went out. I was scared silly, and I prayed a lot. I guess I finished nineteenth.”

Last spring, Glenn, who with his wife operates the taxi service and serves as the Lufkin agent for Western Union, decided she was going to run in IMCA’s Pelican 100 at Shreveport, La.

“When NASCAR wouldn’t let me ran at Houston, Glenn said maybe IMCA would give me a license,” Martha said. “We called Mr. Hitz (Bill Hitz, secretary of IMCA) and he said IMCA did not have rules prohibiting women from competition. Of course, they had to be good drivers.”

‘I took over Glenn’s car (a 1972 Monte Carlo) and we went to Shreveport. The steering arm broke on the fourteenth lap (200-lap race), so I was sidelined.”

Martha came to Iowa for the Illowa 101 at Davenport on June 12 and finished eighth.

She also competed at Oskaloosa June 13 and said she was the fastest qualifier. She finished last in her heat race and “didn’t do any good in the consolation. But they sure drive fast down there.” She completed her Iowa trip at Boone on June 15. “Some nut spun out in front of me, there,” she said, “and I ran over him. I cracked the car up pretty good.”

“There is no way I’ll run wide open,” she said. “I want to go as good as I can, but the important thing is to finish and that’s what I aim to do.”

The men will be happy to hear she isn’t going to go flat out. Undoubtedly, they would be happier if she would stay in Lufkin.

Editor’s note: Martha Wideman would make the 26-car field for the Firecracker 300, however, she would complete only one lap before pulling in with mechanical issues.