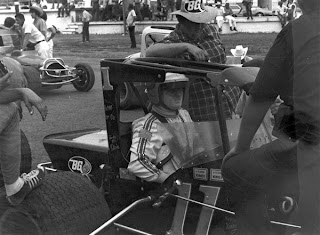 Saturday night race drivers from at least three states will be in Dodge City to run in a race to honor the man, who in 1973 won everything there was to win in Kansas. Merrick Auto Racing is sponsoring the Jim Harkness Memorial Race this weekend in honor of the Ness City man who lost his life in a traffic accident near his home last February.

“I don't know who all are planning to be here,” Merrick said. “But a lot of drivers have indicated they will be here for the race. Drivers from around Dodge City, Oklahoma and some of our boys from Nebraska will be down here.”

Among the drivers who will be attending the race is two of Harkness' friends from Ness City, Fred Hembry and Terry Uehling. They are the two leading point winners on the Merrick Circuit that Harkness won in 1973. Other leaders on the circuit are Jon Johnson of Utica, Herb Copeland of Dodge City and Arnold Horner of Jetmore. The top five drivers are all relatively speaking Harkness neighbors.

“Jimmy was a wonderful guy,” Merrick said. “He started running for me 11 years ago in the old hobby cars. He was real well thought of I'll tell you. If he had been killed in a race car that would have been different because we all kind of expected that the way he loved cars.”

“There is a special trophy to the winner being provided by Ronnie Burns of Ness City,” Merrick said. It will be a traveling trophy that will have the name of the driver who wins the race engraved on it. Burns is going to let the drivers who win the event for the first six years keep the trophy and then plans to present it to Jim's son T. J. after the first six years of the race.”

Harkness had driven cars for 11 years when he was killed and according to Merrick had run everything from the hobbies to the super-modifieds and sprint cars. He was a farmer in Ness City whose hobbies included welding, metal sculpturing and skiing.

Betty Harkness and Jim's son T. J. still live in Ness City, but Merrick said that they were selling the farm where they live and were going to move to Hays sometime in the near future.

In addition to the races in Dodge City Saturday and Sunday there is a Bicentennial Parade in his honor. “All our area race drivers are going to be in the parade pulling their cars," Merrick said.

“He was a perfect little gentleman,” Merrick said. “He didn't drink or smoke. He was the kind of guy you wouldn't notice. He was real well thought of.”

They will notice the absence of Jim Harkness Saturday night, but the spirit he brought to racing will be there intact.