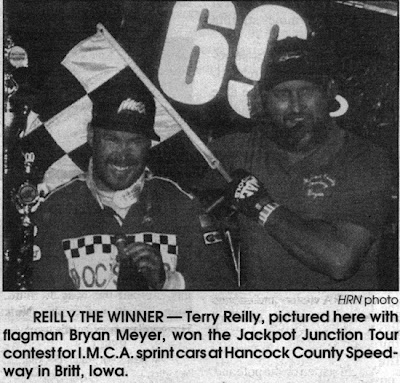 2000 – Terry Reilly of Watertown, S.D., picked up the feature win in the Jackpot Junction Midwest IMCA Sprint Tour at Hancock County Speedway in Britt, Iowa, on June 9. Reilly, who was the defending race winner at the 4/10-mile dirt oval, led all 25 laps, but had to hold off a pair of hard chargers in Kent Winters of Butterfield, Minn., and Sidney Denzer of LeSeuer, Minn., to secure the win. The feature got off to a horrific start as Ron Smith and Dwain Wilmes tangled on the first lap, sending both cars over the edge of turn three. Neither driver was injured but unable to continue in the race. 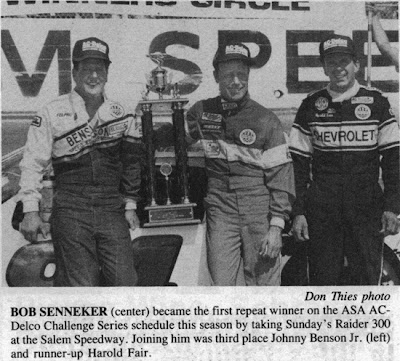 1990 – Bob Senneker extended his all-time career record to 62 American Speed Association wins by capturing the AC-Delco Challenge Series Raider 300 at Salem (Ind.) Speedway on June 10. Senneker, a 17-year ASA veteran, snapped the previous ASA 300 record at Salem Speedway by more than 3 minutes covering the 162-mile distance in 1 hour, 51 minutes and 7 seconds and edging pole winner Harold Fair by 3.7 seconds at the finish. Senneker led the first 97 laps and the last 43 for his fourth career ASA win on the high-banked paved oval to collect $7,715 in prize money from the $74,220 purse. Senneker and Fair were followed by Johnny Benson Jr., Junior Hanley and Scott Hansen. 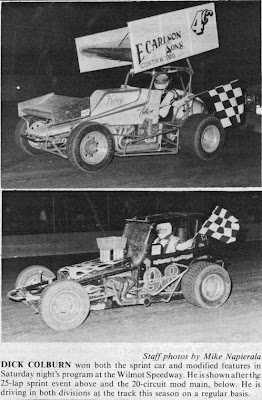 1984 – Dick Colburn captured both the 25-lap sprint car feature and the 20-lap modified main to dominate the racing action at Wilmot (Wis.) Speedway on June 9. The sprint main saw Colburn fly into the lead and build a comfortable cushion until a multi-car accident on lap 14 bunched the field. Colburn was able to maintain the lead on the restart and managed to hold off Darrell Dodd in the closing laps to score the win. In the modified A-main, Bruce Young paced the field through the opening 7 laps and three cautions before a fourth caution appeared on lap 8. When the green reappeared, Colburn worked his way even with Young and grabbed the lead coming down the main straight. He went on to build a comfortable lead and never looked back in making it two for two on the evening.

1979 – Rainouts at some tracks on Friday, June 8, added some new late models to the regulars at Fairmont (Minn.) Speedway, but the results were the same – Denny Hovinga and Bob Shryock in a bumper-to-bumper duel. Hovinga, Shryock and visitor Ed Sanger ran nose to tail for all 25 laps of the feature with Shryock using every bit of the track to get around Hovinga, but it was to no avail as Hovinga scored his third straight feature victory. Shryock, Sanger, Bob Weber and Em Fretheim rounded out the top five. Right after the evening’s program, the promoter announced a $100 bounty for anyone who could beat Hovinga in next week’s race.