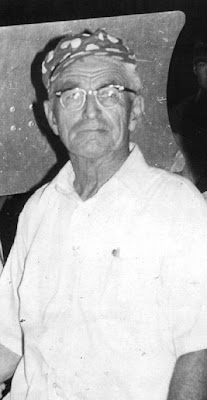 By Ron Maly – Des Moines Register
Knoxville, Iowa (June 6, 1971) - Marion Robinson was talking about racetracks and race cars while sitting at his usual spot - the floor.

He wore a two-tone shirt: Dirt-on-blue. He had almost enough grease on his hands to lubricate his pickup truck. He had red spots on shoes that were coming apart at the seams.

“Your feet bleeding?” someone asked. “That's red paint,” Robinson explained. “I've been painting the bleachers at the Newton track. I rebuilt the same bleachers, rewired the place and I even do the grading on the track.”

Robinson, 64, doesn't know if he should be called a racing promoter or a racing manager. Whatever it is, alligator shoes, $18 striped shirts and double-knit coats are not his bag.

He nearly always looks like he just stepped out from under the hood of a car – and he probably has. He can do it all at the track, including drive the car.

Robinson once had races going at Bloomfield, Iowa; Newton, Iowa; Knoxville, Iowa; Des Moines, Iowa; Webster City, Iowa; and Dayton, Iowa. Now, white-haired and at an age when a lot of men have retirement on their minds, he handles weekly racing shows at Knoxville and Newton. Knoxville is his showcase.

“Knoxville is the number one track in the Midwest,” Robinson said. “Any driver will tell you that. It's a track that is built for automobile racing.”

Robinson is a junior high school dropout with six children and 25 grandchildren. He has seen a half -dozen men die in auto race crashes and he once had to go to Beaver Dam, Wis., to bring a brother- in-law home from a race.

The trip was made in a pickup truck. The brother-in-law was in a casket. He had died at a track.

“I love racing,” said Robinson. “As far as I'm concerned, it's the top spectator sport in America, and it's going to get bigger.”

“There is a car for everyone to get excited about, whether it's an Indianapolis type, a late model, a super modified, a midget or a mini-stock.”

Robinson said there are 62 tracks operating in Iowa now. Races are held somewhere in the state seven nights a week.

Marion drove in his last race - a midget event in Marengo, Iowa - 12 years ago.

“And that night,’ he said, “I got into an argument with my wife, Nadine, over who was actually going to do the driving. The old lady is a better driver than I ever thought of being and wanted to drive that night, but I wouldn’t let her.”

When Robinson isn't hanging around a track somewhere, he’s probably rebuilding a motor or tearing the transmission out of someone's passenger car at his repair shop.

Marion said be owns some suits - including a 25-year-old double-breasted job that is suddenly back in style - but usually wears them only to funerals and weddings.

“People will always take your money,” he said, “no matter how you're dressed."

How is it with Robinson and the green, stuff?

“I could show a financial statement that shows I'm worth $100,000 - and that's a conservative figure,” he said. “But I had to borrow to pay my income tax. You explain that one.”