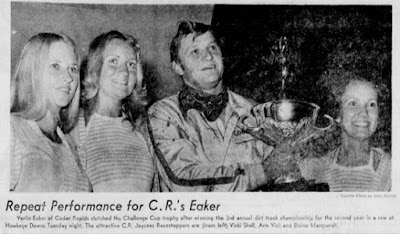 “There was a yellow light on the backstretch and my first thought was, ‘What the hell, I thought the yellow light was banned for this race this year.’”

“But I stuck my arm out to warn the cars behind me. Then, when I came out of turn four I could see the green was still on, so I got back on it.”

Eaker was not seeing things. There was a yellow light, but it belonged to a train that was parked adjacent to the Downs 1/2-mile dirt oval. That was only one of the two scares Eaker got en route to his second straight Challenge Cup title before a crowd estimated at 7,000.

“My oil pressure was good, but I was losing some oil and it, was spraying my goggles,” explained the veteran Cedar Rapids driver. “I had a rag to wipe the oil off, but then I lost the rag. I would have been in serious trouble if I had to run 10 more laps.”

There were two other leaders; Darrell Dake of Cedar Rapids, who earned $100 for his fast time of 25.07, led the first five laps before going out with a broken axle. Mike Niffenegger took over for the next three laps before he and Eaker tangled coming out of turn four. Eaker said contact couldn't be avoided.

“Mike went into turn three too hard and got up too high,” explained Eaker. “I went underneath him and he came down into me. We hit each other pretty hard.”

“I was in a position that we’d hit, no matter what, so I stayed on the gas.”

There were five restarts in the feature and they followed a delay of one hour, 55 minutes due lo intermittent showers. In fact, the trophy dash and consolation had to be canceled because of an insurance clause that will not permit racing after midnight.

The feature was completed at 12:08 a.m., which was within the contract because the race started well before the curfew. Eaker said the track “was not in good shape” when the feature started. "If it hadn’t been for the red flags (restarts) where drivers could bring their cars into the pits to cool them down, there would have been a big loss in equipment.”

The track was hard and slick - and fast - at the finish, which surprised Eaker.

“The groove kept moving higher and higher and the track didn’t stay tacky. I didn’t use rain tires, but halfway through the race I wished I had.”

Stan Stover of Reinbeck (1972 Chevelle) chased Eaker from the 10th lap on and finished second, about four lengths back. Curt Hansen of Dike (1971 Torino) was right on Stover's bumper in third place. Ed Sanger of Waterloo (1972 Chevelle) was fourth and Irv Janey of Cedar Rapids (1971 Plymouth) was fifth. The 1971 Challenge Cup champion, Bill McDonough of Cedar Rapids (1965 Chevy) was eighth.