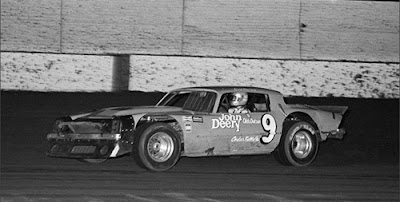 Cedar Rapids, Iowa (June 3, 1979) - Auto racing hasn’t always been a bowl of cherries for Curt Hansen. At first, it was the pits…

“I started racing right out of high school in the sportsman class at Nashua and Charles City,” recalls Hansen, a 34-year-old Dike native who looks about 10 years younger.

“My whole family always traveled around watching IMCA races in Iowa and Missouri, and I always said I’d drive stock cars someday. But when I really did get started my mom and grandma about went into hysterics. They were upset that I went into racing instead of going to college.”

“And the first night I raced I started to wonder if maybe they weren’t right. The guy right in front of me flipped his car and all I could see were his arms and legs and head flopping around. He must have been knocked out.”

“I thought right then about driving right into the pits and calling it quits, but I kept going, and I finished fourth in that race.”

And today, 16 years later, Curt Hansen may be the hottest late model stock car driver in Iowa. On the weekend of May 25-27, for example, he won three straight feature races, at Hawkeye Downs Speedway in Cedar Rapids, at West Liberty and at Waterloo.

Overall, Curt has won eight of the 18 features he’s entered this season. And Hansen will be one of the favorites in Tuesday night’s 7th annual Miller 100 at Hawkeye Downs, as he's the only driver to win the 100-lap classic two times, in 1976 and ‘78.

Auto racing has been good to Hansen’s wallet. He won $41,000 racing last year and $51,000 the year before. He has been the Downs’ point champion the past two seasons as well as in 1975. And he’s leading again this season.

Not that Hansen limits his time to auto racing. The 1962 Dike High School graduate also works for Clay Equipment in Cedar Falls and is one-fourth owner of a small farm equipment manufacturing firm and owns a machine shop.

Small wonder he says, “I don’t have much time to waste. Sundays are especially bad because I don’t get home from racing until 2 in the morning and I have to go to work at 6 Monday morning.

“In July and August, I race five to six nights a week. During the rest of the summer I race four nights a week. At one time last summer we had 16 straight nights of racing scheduled, but the 11th and 12th nights were rained out. That's the only thing that saved me.”

Hansen has entered two cars for the Miller 100, a Chevrolet Camaro and an Oldsmobile Cutlass, both brand new and owned by Vince Fiala of Cedar Rapids. “We’ll try them both out and see which one seems to be working the best,” says Hansen.

Late model drivers hit up to 100 miles per hour on the straightaway of the Downs' half-mile dirt track, so safety and fear play a role.

“Sometimes you think about being afraid,” says Hansen, “but only after the race. Sometimes after a race I’ll lay in bed and think about what might have happened. But it's not in my mind during the race. You’ve just got to be on your toes to make sure you don’t get into a scary situation.”

Hansen, who along with his wife, Alice, has a son, Bobby, 14, and a daughter, Alicia, 5, doesn’t have any illusions of grandeur. Driving in the Indianapolis 500 isn't one of his goals.

“Racing at Indy is like racing sprint cars,” says Hansen. “You’re gonna get hurt; it’s almost guaranteed. And I enjoy racing too much for that. I might be going slower than the Indy drivers, but I’m having as much fun.”

There’s no doubt about that.