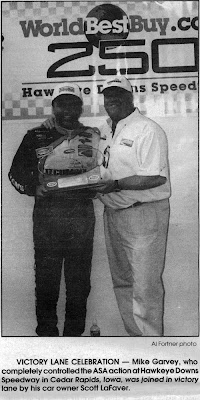 2000 – ASA veteran Mike Garvey had the car to beat at Hawkeye Downs Speedway during the running of the WorldBestBuy.com 250 on Sunday, June 17. Garvey led 237 of 250 laps on the half-mile, collecting his ninth career victory and first of 2000. After leading the first 90 laps, Garvey briefly fell back while pitting under caution, but quickly made his way back to the front, taking the lead from Gary St. Amant on the 104th circuit and pacing the field the rest of the way. Rookie Joey Clanton took runner-up honors and second-year pilot Tristan Dupuis took third. Jack Landis and Mike Miller rounded out the top five.

1990 – Tom Rients captured the 25-lap UMP late model main at Farmer City (Ill.) Raceway on Friday night, June 15, pocketing $1,500 for his efforts. Jim Leka grabbed the lead but was soon challenged by Brian Ater as the pair battled back and forth for several laps. After a lap 9 caution, Ater flew by Leka coming out of turn two on the inside taking over the top spot. Rients, running in third place at the time, must have taken some notes from Ater as he passed Leka as well coming out of turn two and then proceeded to muscle inside of Ater in turns three and four and take the top spot as they crossed the start/finish line. Rients stretched his lead from there and won by nearly a full straightaway advantage. Leka would get by Ater to finish second while Ater settled for third. Fast qualifier (13.218 seconds) Jim Rarick took fourth and Ed Bauman grabbed fifth.

1984 – Gary Gillett of Kansas City, Kan., thrilled his hometown fans when he scored NASCAR Winston Racing Series late model feature win at Lakeside Speedway on Saturday, June 16. It was the first-ever late model victory for the 35-year-old former sprint car driver. Gillett, who owns his own trucking business, credited his sprint car experience with pulling out the last-lap victory. On the final lap, Billy Deckman of Kansas City, Mo., who had trailed Gillett for the final 19 laps, made a daring move on the front stretch and shot past Gillett on the inside. Deckman then lost control going into the first turn, skidding into the fence as Gillett, still on the outside groove, checked up, shot down to the low groove, steering clear of a spinning Deckman and driving the remaining final lap to victory. Ronnie Hoover of Fulton, Mo., inherited the second spot while Jamie Hager of Kansas City, Mo., took third in only his third time behind the wheel of a late model. 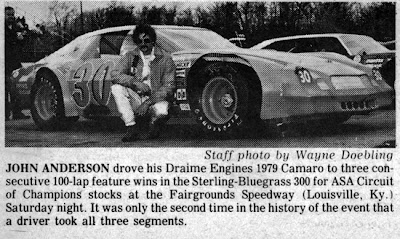 1979 – Michigan’s John Anderson won all three legs of the 13th annual “Sterling-Bluegrass 300” at the Fairgrounds Motor Speedway in Louisville, Ky., on June 16. Anderson became the sixth different winner in seven ASA Circuit of Champions events held this season. Anderson became only the second driver to win all three segments of the triple 100-lap grind, equaling Jesse Baird’s accomplishment. Anderson, who made a shambles of the competition, led 156 of the 300 total laps. Anderson would pass Don Gregory on lap 94 to take the win in the first century race. In the second segment, Anderson would start at the tail after the field was inverted, but quickly made his way to the lead pack and on lap 38, passed race leader Bob Strait for the top spot and then held off a relentless Mike Eddy for the remaining 62 laps. The third and final segment started with Anderson and Eddy on the front row and Eddy out to the quick lead. That lead wouldn’t last long though, as Eddy would bobble a bit on lap 15 and Anderson was there to take advantage. Anderson was able to grow a comfortable lead and won the final 100-lapper by five car lengths over Mark Martin and Don Gregory.