1990 – Steve Fraise and Sonny Smyser were winners at Capital Speedway in Holts Summit, Mo., on Saturday, June 2. Fraise, the “Flyin Iowan” from Montrose, started the 25-lap NASCAR Grand American late model feature on the outside of row six, but made his way steadily through the field and caught Mark Burgtorf of Quincy, Ill., on lap 23 for the lead, then sailed to the win. Smyser, out of Lancaster, Mo., returned to Capital for the first time this season and won the A-modified feature handily, leading all 20 circuits. Racing fans got to see their first racing action at Capital since May 5, after three consecutive washouts.

1984 – Despite five challengers gathering at his back bumper during late-race cautions, Bob Senneker won the Silver Creek Series 250 at Ozark Empire Fairgrounds on Saturday, June 2, by less than one second over Dick Trickle. Following the lead duo under a blanket after 250 laps was Mike Eddy, Alan Kulwicki, Mark Martin and Jim Sauter. Senneker credited his victory to making only a single pit stop and tire change while all of his lead-lap pursuers elected to make a second tire changed during a caution with 50 laps remaining in the race.

1979 – Dub May made shambles of the World of Outlaws’ debut at the Sunshine State Expo Grounds in Topeka, Kan., on June 2, as he led all 40 laps in making a near-clean sweep of the program. May shattered the old track record in qualifying, eclipsing Sane Carson’s mark of 20.83 seconds. He would finish second in his heat and win the trophy dash. Although May made it look easy in winning the feature, he had to hold off persistent challenges from both Steve Kinser and Leland McSpadden in the early going and then Bobby Marshall in the closing stages. Marshall would settle for second followed by Kinser, Bobby Layne and McSpadden. 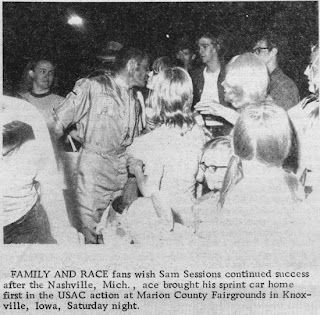 1972 - Nashville, Michigan’s Sam Sessions jumped from Indianapolis and the 500 to the half-mile oval of Marion County Fairgrounds in Knoxville, Iowa, and won the 40-lap United States Auto Club championship sprint car race on June 3. Sessions, driving the Maury Amerling Chevrolet, set a new USAC record, with a time of 16 minutes and 23 seconds for the 20-mile distance. Sessions recorded fifth fastest time, which placed him on the outside of the front row with the inverted top six qualifiers. Sessions set the pace throughout the contest but was slowed for heavy lap traffic at times allowing Don Nordhorn, Greg Weld, and Tom Bigelow to stay within striking distance. Sessions maneuvered his way through, though, and won by a quarter of a lap at the finish. Nordhorn, Weld, Bigelow and Bill Thrasher rounded out the top five.