1984 – Dean Chadd of Lincoln, Neb., was able to take advantage of his competitor’s bad luck and take his sprinter to the A-feature victory at Eagle (Neb.) Raceway on June 22. Ray Lipsey was leading the event with Don Droud Jr. and J.J. Riggins close behind. When Droud and Riggins decided to make their moves for the lead, all three made contact, causing them all to spin out. Chadd would inherit the lead on lap 17 and was never challenged for the remaining 8 laps. Dave Hollaman of Martell, Neb., finished second while Ed Bowes of Lincoln took third. 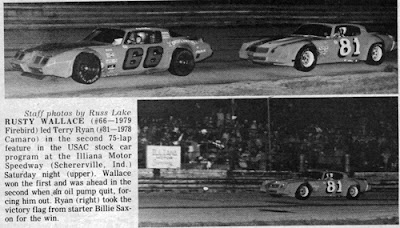 1979 – Rusty Wallace and Terry Ryan each won a 75-lap feature to highlight the USAC stock car program at Illiana Speedway in Schererville, Ind., on June 23. On what was an unseasonably cold summer night, Wallace would grab the victory in the first 75-lapper after passing Ryan early in the contest and then fending off Dave Watson during the middle stages. Ryan would mount a late charge but it was no avail. Wallace and Ryan were followed by Ramo Stott, Bill Venturini and Chuck Gurney. In the second 75-lapper, Wallace would grab the top spot at the beginning and lead the first 55 laps before an oil pump would send him to the sidelines. Ryan took over and never relinquished the lead after that. Chuck Gurney, Ricci Ware Jr., Bill Venturini and Bay Darnell rounded out the top five.

1978 – Bruce Sparrman of Bloomington, Minn., started on the inside of row one, survived three cautions, and staved off Greg Arenson of Eden Prairie, Minn., to score his first late model win of the season. Sparrman, driving the Como-Snelling Camaro, drove a smooth race and ignored all of the chaos the 17-car field was offering behind him. Dick Stang of Prior Lake, Minn., was involved in two crashes, left the track on the back of a wrecker, but managed to return to finish with the eight other cars that survived the 30-lap event. 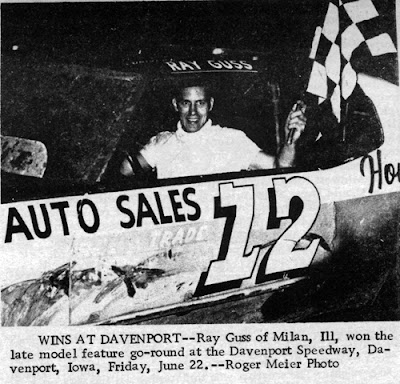 1973 – Ray Guss of Milan, Ill., got back in the thick of the season point race at the Mississippi Valley Fairgrounds with a convincing late model modified victory on Friday, June 22. Guss, who started the evening third in the point standings, roared past Al Terrill on lap 6 of the 25-lap feature and was never headed for the rest of the event. John Connolly of Delhi, Iowa chased Guss across the finish line with Bill McCardle of Shullsburg, Wis., taking third, Duane Steffe of East Moline, Ill., in fourth and Jerry Reinhart of Moline, Ill, rounding out the top five.